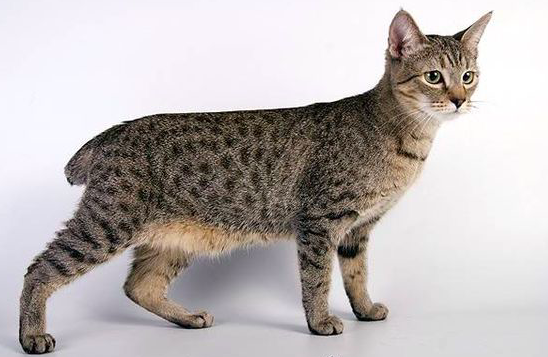 History: Pixiebob breed was bred in the US, outside the United States it is not known. The breed owes its origin by North American breeders who wanted to breed a breed similar to Lynx Red. However, later DNA tests have not confirmed affinity with the feature. Cats of similar appearance received in 1985 Carol Ann Brewer in Washington.

Nature: Cats of this breed are very kind and social. They can easily adapt to situations and they can get used to a new environment. Some breeders say they have the character of a loyal dog. Despite its wild look, Pixiebob is a very devoted and playful cat. It also applies that it is very lively. With children, dogs, or other animals, it is getting well. They can stay with other cats, but they prefer to be in the family themselves. The breed is very intelligent, it is able to understand some human words and phrases. Pixiebob is very happy and it loves to play.

Body: Pixiebob weighs between is 4 and 8 kg. The head is round and quite large. The eyes are round and the colour is greenish yellow, they are slightly slanted. The ears are wide at the base, tapering to the round toe, and far apart. On their toes they are desirable bristles. Pixiebob is very powerful. The body and legs are muscular. The tail is quite long. The coat is short and dense. Colouring can be any, but most often wild, fiery. Face design should be noticeable with dark lines on the cheeks and light it is called glasses around the eyes. It grows up for four year compare to House Cat.

Coat: In most cases, cats are shorthaired, but there are also long-haired variants.

Care: Pixiebob is not a cat that needs special care. Its hair is enough to brush once a week. Diet should be varied and rich in protein.

Colour varieties: Most Pixiebob cats have a dark coat colour around the eyes with a white coat. Their nipples cover the white coat, but they often have dark skin under the white fur. Some of them will change from black to white.