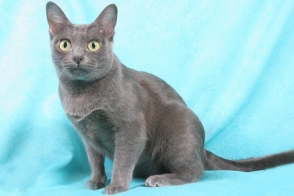 History: This breed is named after the Thai province of Cao Nguyen Khorat, where the breed came from, and where this cat is called Si-Sawat (bringing happiness). In Thai - formerly Siamese - manuscripts, the mention of a cat with fine grey hair with silver tips of hairs and glowing eyes have been appearing for centuries. It is supposed that it is meant Korat. Until recently, it was strictly forbidden to sell the Korat in Thailand; it was only possible to obtain them.

In the United States of America, the first Korat was already at the end of the 19th century, but today it is a rare breed that is rare even in the country of origin. Because of this, it is also strictly forbidden to cross a Korat with another breed in order to keep the breed as clean as possible. FIFe recognized the breed in 1982.

Temperament: These cats are cuddly that are very fond of human society and require a lot of attention. With other cats, they usually get well, but they may experience jealousy. Korats show enormous intelligence, learns easily to get walk in a harness. Thanks to their liveliness and vigour, they also love climbing and games. These are talking cats with a really melodious voice.

Body: The Korat has a moderate oriental appearance. The medium-sized body is slender and elongated, but not as much as Siamese Cats. The hind legs are longer than the front, so the back is slightly sloping. The muscles are well developed, making the cat harder than looks. The mid-tail is wide at the base and converges to a rounded tip. The heart's head has high-mounted large ears, the nose of the profile has a slight deflection. The facial bones and chin are strong and well developed. Big eyes are oriental.

Coat: Short to medium-length hair is shining and satin-like. The undercoat is completely missing, so the coat is tight to the skin. When the cat is moving, its hair tends to distribute along the spine.

Care: Korat´s coat requires a minimum care. Just brush it once a week with a soft brush, while at the time of brushing it can be a helpful rubber brush. The sharp ends of the claws should be cut regularly and the ears cleaned when necessary.

Colour variants: At the cat shows there is highly valued the specific blue colour of the coat. On the roots, the hairs are brighter and the ends get darker. Each tip of the hair has a silver touch. On the limbs, silvery tipping is more intense. Korat´s eyes are green, but it may take two to four years when the colour will be developed completely. Because of this, younger individuals may have eyes that are both amber. The “front nose mirror” and the pads are blue-grey to lavender pink.

Recently, coral lilies started to breed. The chocolate factor is responsible for this hair colour it comes from Thailand, there are many cats donors of this factor.