Home ● FCI I. Sheepdogs and Cattledogs (except Swiss Cattledogs) ● Komondor 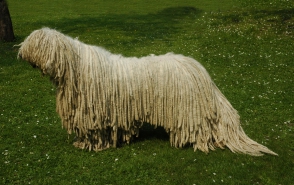 Komondor is incorruptible, sharp, brave and reliable protector of grazing cattle, a defender of its owner and attentive watcher of owner´s residence, where it defends very quietly, but not intrusive. In the territory, which it considers its sovereign territory, it will not tolerate any strangers. It is extremely suspicious. Its attractive exterior and decent behaviour usually draws the respect, even some concern among ordinary observers. This is due, among other reasons, due to its long hair almost completely covering its face. Its face remains that is hidden to observer.

This breed is not for inexperienced owners. It is ideal for owners who are quiet, sober, diligent and talented by a natural authority, which can by non-violent way exercise in everyday life. It requires not only timely, but for sheer consistency-based education from an early age, but also the widest possible systematic early socialization.

Slavish obedience by this breed, nobody can expect or require, because it is very independent breed. Its relationship with the owner must be based on mutual respect and trust. It is intelligent dog only by well-led education and training cooperation after this breed will cooperate. The aim of the training must be its perfect control in adulthood for various situations.

Even as a purely companion dog it is guarding by its own way. No one should be advised to try to enter on dog´s guarded area. As an attendant it is always responsible and reliable. When approaching someone apparently unauthorized, it notifies the owner and warns intruders by loud barking. Strange persons should certainly not try to make a closer contact, since in any case it is not willing to accept any people that do not know well.

What is distrustful of strangers, it is more faithful and devoted to the owner and members of owner´s family. Properly socialized it can be very tolerant with children. Despite its size and strength in their company it becomes thoughtfully and carefully. That this fierce defender it can be surprisingly sensitive and empathetic, evidenced by the fact that has been proven to canistherapy.

During walks it is advisable to always have a dog with a leash it is also recommendable to walk with dog always half a step behind the owner, never in front of owner. It is the law of the dog pack, under which always it goes ahead of its leaders. Komondor can be all year round in the outdoor kennel. Its coat protects it from extreme temperatures above and below zero.

The head should be broad, densely hairy. Skulls above arched eyebrows are prominent. The frontal slope should be clearly defined. The muzzle should be blunt ended. The nasal bridge is straight, black nose.

Lips are on the edges of black pigmentation and tight fitting to the jaws and teeth. Lower jaw must be powerfully muscled and as the top strong and powerful. A full set of teeth and regular scissor bite is required. Cheeks are wide due to the strength of the muscles controlling the jaw bite.

Eyes should be horizontal, dark brown colour. Eyelids with black edges are lying close to the eyeballs. The earlobes are deployed in an appropriate amount, hanging, "V" or "U". Even in the heat of passion, even if the attack is not lifted.

The neck is very muscular, the rest carried relatively low, it should be rather short. Parts of body that are involved on the top line of the body, they are wide and well muscled. Withers should be sufficiently long, well marked. Back short, the shoulders are moderately long, stern demands broad, moderately long, slightly sloping.

The tail should be set low, always suspended, its tip is slightly bent horizontally at most. It is desirable that reached to the hocks. In action it carried higher, but not exceeding the level of the topline of the body.

Chest should be broad front and sufficiently muscled chest appropriately deep, wide and long. The abdomen is slightly tucked. The forelegs should be powerful and straight, pillar, parallel and perpendicular approach must be broad. They are firmly attached to the body and freely movable, the bones have to be strong and solid joints large. The feet have to be big, strong, tightly knit toes, padded should have slate-gray in colour and must be strong and flexible. Nails should be grey.

The hindquarters are angled, linked to the stern, as she must be broad and well muscled. Thighs should be very muscular and bulky. Dewclaws must be removed. The movement is a lightweight, free, regular and large.

The whole body should be covered by long hair. It consists of a rich coarser top coat and a finer undercoat and prone to pilling. With proper treatment produces long, thick and solid tomentose cords. The coat is the longest on the back, shoulders and back of thighs min. from 20 to 27 cm. Desirable is not combed or inadequately care or completely neglect a coat. Its colour is ivory. Coat must be pruned, individual tomentose cords and cords in fact do not make by themselves, they must be care by the instrument pruning. Coat care the dog   must get used to tolerate already in the age of puppy later the dog could not tolerate.

Any deviation from the standard requirements must be considered as defects and evaluate accurately the degree of seriousness with regard to the health and welfare of the male or female. To negative defects belongs weak constitution, muscular weakness, intussusception or eyelids - (entropion, ectropion), overshot or undershot jaw, wry, erect or light ears, short tail (ending 3 cm above hock), gross limb wrong movement, coat colour other than ivory, multicoloured coat, height at withers is less than the lower limit standard.