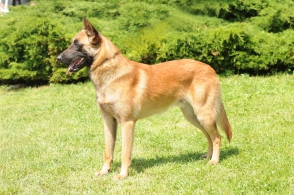 Belgian Shepherd with short hair, only fawn with black overlay and with black mask.

This breed is compared to its rough relative more easily trainable and manageable, decidedly weaker in character, more flexible. During the training you cannot try the mechanical methods as for traditional German Shepherd. This breed is more sensitive, learning and understand quickly.

Malinois excels in both trainings such as sport and professional service, and that why it is so popular with both the police and the army, and for sports instructors or rescuers (lighter build and agility it relatively easy to crawl ruins and search for victims, and because it is naturally hardworking, it is working quickly and you can rely on it). As a working dog is well controlled without direct contact with the handler.

Due to its character-friendly it’s also suitable as a social dogs. When the attitude to it is very strict the dog is losing trust in owner.

Malinois is significantly smaller and lighter than the rest type of this breed. Its body is muscled. Belgian Shepherds are medium-sized dogs, shortly rectangular body frame. Males about 62 cm and females 58 cm (for both sexes, the tolerance - 2 / + 4 cm). Weight of body it is various male 25-30 kg for female 20 to 25 kg.

Head high, proudly carried, moderate length, straight outlines, as if carved dry. Skull should be appropriately broad width corresponding to the length of the head, almost as long as the muzzle. The forehead should be rather flat. Longitudinal front cutting machine is only slightly pronounced. The occipital protuberance is only slightly noticeable. The frontal slope is distinct, reasonably steep. Muzzle should be formed under the eyes, cannot be hollowed and the overall shape of an elongated wedge. Cheeks are dry, really flat, but well-muscled.

The mouth is relatively large and broad. Lips may be narrow, tightly fitting to the jaws and teeth on the edges of fully pigmented. The teeth are large, pure white, regularly spaced and deeply fixed in strong jaws. It requires a scissor bite, but tolerates also pincer bite. Full dentition is requested, but may be missing two of the first premolars (P1) and molars 3 (M3) is not considered.

Pricked ears should be rather small, set high, distinctly triangular shape, with solid tips. In action must be carried vertically, rather than spread out to the sides or tops leaning toward each other.

The neck is clearly indented from the head rather longer adequately muscled. The throat shall be without dewlap, nape slightly arched. Body should be strong topline of the body is in the back and loins straight tap must be distinctive, back firm, short and tightly muscled. The loin should be short, moderately broad and muscular. Croup is a little steep, fairly broad and well-muscled.

The tail should be set in correct level, strong at the root, medium length. Reaching at least to hock joints. In rest position hanging down, and its end is level with the hock slightly curved upwards. When moving carried clearly higher, but never above the topline of the body. The tip must not form i.e. crochet.

The chest should not be too broad, but deep. The ribs are in their upper part more strongly curved than near the sternum. The abdomen is adequately rolled up. Forelegs should be boned, without coarse and should be properly muscled vertically to ground. Shoulders should be long, oblique, close to the chest. Elbows should be strong forearms are long, flat, firm wrist, dry. Pasterns should be strong and short. Feet are round, "cat", toes arched and tight, padded rigid, but flexible claws solid, dark colour.

The hindquarters should be strong, vertically to ground. Thighs should be moderately long, broad and well-muscled, knees should be bent. Tibia must have adequate length, broad and muscular. Hocks to be low over the base, broad, moderately angulated. The hocks are strong, short. Persistent dewclaws are not acceptable. All kinds of movements are lively, open, parallel, balanced.

The hair is short on the head and distal portions of both legs, slightly longer just at the back of the thighs, neck, where the "collar" is starting at the base of the ears and stretching to the neck and tail, which each protruding guard hair of the coat looks like an awn blade.

Colouring Malinoise must be beige to red with black shading. Beige must be rich, not whitish. In the face should be expressive dark, preferably black mask that extends to the whole muzzle and extends to the corners of the mouth, eyelids and ears. At least it must be black earlobes, upper edges of the eyelids and lips. Coat may be moderately or completely forming a very short smooth coat and rough, bristly or brindle.

Faults the standard requirements must be considered as defects and precisely evaluated by the degree of seriousness with regard to health and well-being. To negative defects include aggression or fearfulness, atypical overall appearance, overshot or undershot jaw, wry mouth, lack of one canine or P3, P4, M1, M2 or 3 or more teeth, extensive non-pigmentation of nose, eye rims and lips, earlobes suspended or surgery erect, tail missing or shortened, carried too high, curled into a circle or twisted, any other colour of the coat than specified in the standard, large white shirt, white markings on the legs extending higher than the mid forelegs or white markings anywhere else on the body, absence of mask on the muzzle, height at withers which is different from standard.