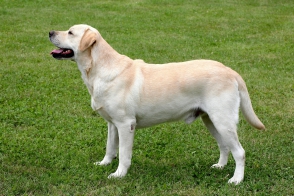 Labradors were indispensable helping of local fishermen pulled from the water nets and ropes, retrieving objects fallen into the water, transferring the message from shore to ship and back and from one ship to another, rescuing a drowning man... Since the turn of the 18th and 19th centuries they have come to the UK on boats of fishermen-hunters cod.

Comparatively speaking, the Labrador is not a very old breed, its breed club having been formed in 1916 and the Yellow Labrador Club having been founded in 1925. It was in field trialling that the Labrador found early fame, having been originally introduced to these shores in the late 1800s by Col Peter Hawker and the Earl of Malmesbury. It was a dog called Malmesbury Tramp which was described by Lorna, Countess Howe as one of the ‘tap roots’ of the modern Labrador.

Thanks to the versatile usability of the ability to work in water there were bred several n different breeds of retrievers. From a development perspective, the Retrievers disparate group of hunting dogs, although it originated as specialists working in England originally intended only for bringing (retrieve) caught animals on land and in the water. They retain their remarkable versatility, which is one of the reasons for their popularity.

Originally Labrador retriever settled only in black, differently coloured dogs were excluded from breeding. Only later was expanded to breeding individuals yellow and subsequently a liver brown.

Breed gained great popularity and became virtually fashionable, in the period after the World War II.

In Europe Labrador Retriever was not only used as a bringer, but also as a hunting dog to use for different types of hunting. It is an avid lover of water. For its abilities and gentle and friendly temperament foundation also successfully launching as the blind guide dog, assistance dog deaf and disabled people, but also as a service dog Customs. It became a popular and fashionable companion breed, and it is given by nature it is not surprising that it is also very successful in canistherapy. It excels extraordinary intelligence, composure, tractable and fearlessness. In order to do something, begins a vigorous and zealous it is devoted and loving companion of the owner and its family.

It is almost always kind and friendly, active, without a trace of aggression or undue shyness. It is excellent for children. It is characterized by immense patience, so it remains to be seen especially with the younger ones, so it did not bother consciously or unconsciously.

Education and training Labrador Retriever there are not any particular problems regarding the breed suitable for owners - beginners. When education and training will suffice kind and gentle consistency, but also so good-natured dog needs to feel its owners as a leader of the pack, resolute and fair.

It depends on if it originates from a puppy show, or work (''s trail ") line. Representatives of both lines not only differ in character. Dogs for dog shows are heavier body and character submissive, working dogs and bitches are usually lighter in body, energetic character and the constant contact with people.

Individuals from British farms are reportedly calm and mature earlier, while those who come from farms in the U.S. tend to be temperamental and mature later.

This is a dog burly body, briefly tied with wide and deep chest, strong legs. It must be neither coarse nor too heavy, as it is required to be active, alert and lively.
Ideal height at wither ranges from 56 to 57 cm males and in the range of 54 to 56 cm females.

The skull should be broad, shapely. Cheeks should not act too (to be too "fleshy", bulging sideways), frontal slope (stop) is steep. The muzzle must be strong, must never be pointed at the end. The nose should be broad, nostrils open properly.

Jaws should be strong, medium length, large teeth properly, with a perfect, regular and complete scissor bite, so upper teeth 6 incisors closely overlapping down teeth 6, both of which are fixed in the jaws.

Eyes should be medium-sized, expression, expressing intelligence and gentle nature. They are dark brown or hazel colour. The earlobes are to be neither large nor heavy, and they are hanging close to head, developed rather far back.

The neck is strong, without dewlap on the throat, merges smoothly into the shoulders. Topline body should be straight. Shoulders must be broad, short, tightly "tied" to the bridge and stern reasonably strong, stern towards the root of the tail.

The tail is characteristic of the breed. It is called-otter at the root very strong, towards the tip gradually narrowing. It must be moderately long, without a "flag" on the bottom, but throughout the round with short, very thick hair, so on an imaginary cross-section looks round. It may be carried gaily, but it should not curl over the back arched.

The chest should have proper width and depth and appropriately clothing sprung ribs, but not barrel-shaped, so that the body not seem to be too heavy. Loose parts of legs (from elbow to paw) are strong bones and when viewed from the front or from the side must be vertically to ground, the blades should be long and sloping.

The coat is typical, short, dense, constitutes neither waves nor the rear forelegs "feathering" or on the thigh "pants". By touch it is quite hard.