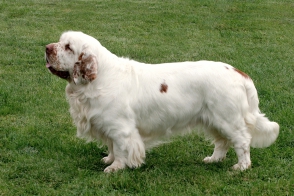 Clumber Spaniels are said to come from France two hundred years ago, the Clumber was brought to Great Britain by the Duke of Newcastle, and bred at his family home of Clumber Park in Nottinghamshire. It is a very heavy dog, and its pace of working is more leisurely than that of other Spaniels. That has been allowed to become heavier since the 1950s, and though the top weight for dogs it is now at 34 kg, it would appear that some are in excess of even this figure. However, lovers of the breed should make certain that its great size does not encourage any weakness in its hindquarters.

This breed was guarding often farm houses, hunting in games for using, there were cooperating with falconers, that is why they were called "bird dogs". There is close relationship development groups that have exactly the same type of long coat. Both Flushing and Longhaired breed originated through labour specialization and differentiate themselves from the work while hunting. While the ancestors of long-haired hounds  became a specialist in hunting small game birds, ancestors Spaniel animals, mostly small furry (hare) lurking in vegetation cover, after finding it that wakes up (expelled), which was the signal for the launch of trained raptors, usually hawk.

Later, when predators are not used and replaced them with firearms could ancestors Spaniel “pointed” hare, drive to hunters "pointed to hunter´s gun”. British hunters did not demand anything more by this breed, because the bringing of preys in game they had other specialists - retrievers.

It is calm, wise and it moves slower when fishing really perfectly suited and still suits persons of older age. It remains that its hunting skills are excellent - when it works it is quiet and fully utilizes its excellent fine sense of smell.

If necessary, it can be very decisive. It's the perfect stoic with a big heart, intelligent, judicious, kind and sweet, but also appropriately confident. But it never shows the slightest inclination to aggression, children tolerates well, but for children is not hilarious companion.

Its behaviour is measured, refined and noble. It appreciates its quite from hunting dog over time it became largely a companion dog. It is particularly suitable for those owners who can appreciate quiet and balance the breed is rather closed, but a devoted friend. It is capable of complete and long walk,  the tempo may not approach race walking.

Its training is not difficul, it can handle even a beginner. Early socialization is necessary to accustom the dog to various people, dogs, other animals and different environments. Socialization and its fluent continuing education, but there is not rush. It is necessary to proceed slowly and subtly, of course, with understanding. Everything needs a little time. It manages to be simultaneously both excellent hunting, but also companion dog.

Clumber Spaniel is difficult to care  about the coat, long coat and white colouring requires, especially in urban areas, especially where the air is plagued by a number of air dust particles, regular combing, bathing and daily care of the eyes, which should be flushed out at least according to the situation once a day or several times a day with water for special eye dogs water.

This is a dog of balanced proportions, strong bones and strong body, with a mournful or sometime sad expression. Its weight is 29.5 - 34 kg for males and 25 - 29.5 kg for females.

The head should be large, angular, medium long and balanced. None of the parts must be excessively bulky. The skull is in the parietal landscape of broad, occiput must be clear, the eyebrows are pronounced stop the headlong. Muzzle should be powerful and square.

Lips are large, loose. The upper reaches deep, so that largely overlaps the lower jaw.

Jaws must be strong bite to be perfect and complete (incisors six above and six below), scissor teeth fitted vertically to the jaws, so upper teeth closely overlapping down teeth which means that their back surface touches their front surfaces.

The eyes should be clear, dark amber in colour, somewhat deeper seated, conjunctiva may be slightly visible, but not too much. The eye may not be completely open. Bulging and very bright eyes are considered as not acceptable. It may not occur or entropion or other eye disorders.

The neck is adequately long, strong and powerful. Body has to be long, very muscular and powerful, low over the mount, which means that the legs must not be too long. The back is required straight, wide and long. Loin is muscular.

The tail is short, but in countries where this act is the law on protection of animals has been prohibited, it may be naturally long. It should be moderately long, thick at the root and towards the tip tapers. Whether it is docked or not, it should be set on low, well feathered and carried level with the topline of the body.

Chest deep, ribs must be properly sprung, last reach far back. Weaknesses have to be significantly lowered. The forelegs are short, straight, strong, strong bones, pelvic very powerful, appropriately strong. Your knees should be bent appropriately. They may be neither in nor out. Feet should be large, round and well feathered. Coat on their margins, it is necessary to cut around, not only at the dog show dogs from creating nasty dirt collecting "tatters".

The movement is typical gait because the body is long and relatively short limbs. The hair must be abundant, closed (fitting), silky and straight, rear of front and hind legs and front of the chest is appropriately long and constitute the rear forearms "feathering", rear thigh "pants" and the front of the chest "jabot" (frill). Colour should preferably be white with lemon-yellow markings. Orange signs are permitted. Small spots are also on the skull, fine at the sides of the muzzle.