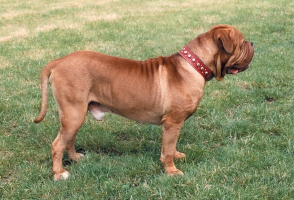 It is a quiet, rarely balanced dog with high resistance to provocation, it can come as a shock for someone who considers it and it is a thoughtless dog is thoughtless, you can play tricks with. Under the guise of phlegmatic hide attentive, confident and courageous dog that is ready to intervene at the most appropriate time itself, which is decided only if it could itself. It is suitable for guarding and this work it takes place with extreme vigilance and great courage but without unnecessary aggression, as if it is aware that the uninvited guests just look at it, as it is no reason to attract itself.

Its owner and members of its family is a great companion, very cuddling, utterly faithful and beloved. It has a good relationship with the children, treating them as a patient but strict nurse. It's very sensitive, which it can be a dog of this type quite surprising. It loves peace and quiet, it does not tolerate e.g. a home argument. "My family-pack" it is very dependent on. It is typical because pack that is arguing it will finish soon or later it must be prevented from this situation.

You cannot require from it and expect absolute subordination. It hates any harsh training methods, you can only lead to spoilage and provoke aggression. Much more true kind words there are said with a clear voice intonation. If you obey, you must praise it, even exaggerated. You should perhaps especially acted inappropriately, it can punish by pulling up zje skin of the neck, it would not be too serious, just a strong hint. Such punishment it knows every dog from an early age and never forgets, because it is deeply impressed from young age when its mother-female punished the puppies. It is desirable that between dog and owner created a relationship based on mutual respect and trust.

Male quite often tends to behave in a dominant towards other dogs. With that, the owner must calculate and this tends to dampen effectively at an early age and the widest possible systematic socialization and fluent continuing mild, loving leadership, but totally fierce consistent training. It is a very powerful dog, which must at all times be fully controllable, otherwise it hardly what takes (at its strength and slung centre of gravity of the body) and the strongest man.

It is not a dog suitable for everybody and especially it is not good for beginners. During its education it is necessary to proceed always with absolute calm and deliberation. The owner must be endowed with natural authority and the ability to peacefully exercise it at any time, and dealings with the dog must always be consistent.

Height at withers, male is 60 to 68 cm, weight of body, male is min. 50 kg for female min. 45 kg. Female must have all the essential breed features, but they are less pronounced than in dogs. The head is massive, rectangular, relatively short, broad, concave lines and when viewed from the front trapezoidal shape. Topline of skull is to be seen from the side in an imaginary convergent extension (Convergent), with the muzzle. Perimeter of the skull measured at its widest point corresponds to male height at the withers.

Nose is broad with appropriately open nostrils. Its colour matches the colour of the "mask" (dark coat colour) on the muzzle. Turned-up nose is permissible, but not sunken face. Eyes are oval, apart saved. Their colour should be dark brown or hazel in individuals with a black mask. In individuals with brown or without mask is tolerated lighter colour, it is undesirable.

The croup is moderately sloping and leaning to the tail. It should be very thick at the base, set low and should reach the hocks, but not under them. Must not be kinked or twisted. In repose carried hanging down, in action lifted so that the imaginary vertical line passing through its root angle of about 90 to 120 degrees.

Feet strong, with fingers tightly-knit, strong curved claws and high supple padded. Despite its relatively large body, weight it must stand on feet quite firmly and securely.

Coat is fine, short and soft to the touch.

Colours: self-coloured, in all shades of fawn, from mahogany to Isabella. A good pigmentation is desirable. Limited white patches are permissible on the fore chest and the extremities of the limbs.

Black mask: The mask is often only slightly spread out and must not invade the cranial region. There may be slight black shading on the skull, ears, neck and top of body. The nose is black.

Brown mask: (used to be called red or bistre). The nose is brown; the eye rims and edges of the lips are also brown. There may be non-invasive brown shading; each hair having a fawn or sandy zone and a brown zone. In this case the inclined parts of the body are a paler colour.

No mask: The coat is fawn: the skin appears red (also formerly called “red mask”). The nose can then be reddish.