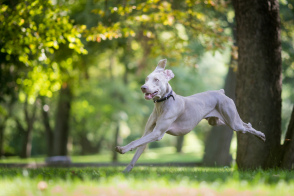 Today, the Weimaraner breed serves well as a family pet thanks to its attractive coloring and its desire to be its owner’s constant companion. Despite their strong family bond, Weimaraner’s are still hunting dogs and they possess an excellent sense of smell, making them perfect tracking dogs. They are reliable hunting dogs and retrievers with a natural, strong and instinctive drive to catch prey. They excel both in the water and on land and act as popular pets among hunters, since they are easy to control, have a versatile skillset and high endurance. In addition to their hunting skills, they also have a generally constant, strong protective instinct, making the breed a powerful and reliable guard dog. Weimaraner’s are also among the bigger pointers.

The Weimaraner breed is energetic, self-assured, fearless and therefore primarily suited for hunting, but also for people who are active and will allow the dog to run in open spaces and exercise. Given the breed’s self-assurance, it is important to know how best to discipline them, meaning the dog isn’t the best choice for total beginners.

The Weimaraner is a “rougher” dog. They may learn quickly, but they will also try to assert themselves. For this reason, strict drills do not work well and could even result in the dog’s total refusal to cooperate.

Training a Weimaraner requires a special approach and it’s best not to allow their training to become routine. Their intelligence demands a change in your approach and it’s best to entertain the dogs as much as possible in their training. Weimaraner’s find drills difficult and it’ll be hard to get them to play along. Because of their strong hunting instinct, it is best to train them the ‘come’ command with heavy consistency while they are still puppies. You should devote enough time to training, as a badly behaved Weimaraner can cause a lot of unpleasant problems for its owner and neighborhood.

Given their size, Weimaraner’s are relatively compact dogs. They can be quiet at home, but they will need adequate exercise. They require long walks and they love to run. It is good to keep them busy not only physically, but also by engaging them in hunting games or similar activities. Weimaraner’s have a short coat and they will want to be with their owner as much as possible, making keeping them in an outdoor pen a bad idea.

Made obvious by the name, this breed originally comes from Germany. Weimaraner’s come as a medium sized pet to a large hunting dog with an athletic appearance. They are also popular thanks to their attractive color, which can range from blue-grey to silver-grey. The dogs reach a height at the withers of 59 - 70cm, bitches 57- 65cm. Their weight in adulthood ranges from about 30 – 40kg and in bitches 25 -35kg. They typically live for 11 – 14 years.

They have a slender body that is beautifully shaped and muscular. Their head is well in proportion with their body, their lips slightly overhanging, and their teeth have a scissor bite. Their ears are highly positioned and hang down to about the corner of the mouth. Their round eyes are positioned at a slant. Their strong, deep chest has well-arched ribs. Their legs are sinewy with well-shaped muscles. Their strong, well-coated tail is low positioned. In some countries, the tail can be docked. The Weimaraner has a smooth, very thick coat, either without underfur or with a small amount of underfur.

Weimaraner’s do not suffer from many diseases and they are a healthy breed, but they too can be prone to some diseases. An example is hip dysplasia, and they can also be prone to gastric torsion or skin allergies.