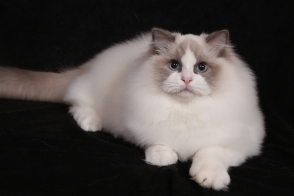 History: Ragdoll was bred in America in 1965. The breed was bred by the no pedigree white J Persian named Josephine. Before the kittens were born, this cat suffered with a car accident after which its behaviour was changed. It began to commemorate the typical features of the Ragdoll breed that its kittens inherited. From a genetic point of view, however, this story is impossible. However, the breed is really derived from Josephine´s kittens. The founder of the breed became - Daddy War Bucks which was crossed with Birma.

The name of the breed has been given its typical features - after picking up the stripes, the kitten releases the muscles, so it reminds a rag doll (from the "Rag" cloth, "doll" doll). The breed was recognized in the 1970s by all but one organizations.

Nature: Friendly, quiet, soft and compliant nature. Cat loves pets, people are very friendly, but they do not force attention. They are social, playful and curious. Because of its credulity to strangers and other animals, they are suitable for feline therapy, but it is not advisable to let them run outdoors because they could easily be diverted to someone else. The Ragdolls are extraordinarily balanced animals, which do not make any difference. They use their claws only in extreme urgency, and an important feature of nature is their unwillingness to fight. They are modest, and their soft voice is seldom used. With other cats they are getting well, solitude, on the contrary, they do not like it. They say they resemble dogs - they like to remind them, they watch their owners and learn to walk for a walk with a harness.

Body: It is a large, muscular cat with a sturdy chest, a sub-body and heavy bones. But the body is elegant and long. The head is wedge-shaped and large, with a solid strong chin, full cheeks and rounded nose. The neck is usually short and strong. Together with the long hair, it is continuously connected to the chest. The front legs are slightly shorter - the back is thus slightly upward. The paws are round, large and firm, with interlocking tufts of hairs. The tail has a Ragdoll long and thick. Medium-sized ears set further apart are slightly rounded. The blue-coloured eyes are large and oval, far apart. The nose is slightly bent.

Coat: The cats of this breed have their long coat very dense, soft, silky and without a tendency to moult. It stays around the body, it does not stop. In the summer it is moulting. The head is the shortest and the neck and the most beautiful. Kittens usually start white and colour will begin after a few weeks. The hair colouring process ends until the age of 4, when their physical development is completed.

Care: Ragdoll's hair does not require any special care, it is seldom tangled. Combing is enough once a week with a rough crest. In the summer, at the time of mashing, we can use a rubber brush and a more frequent spring to get rid of loose hair. Be careful of combing which is provided very often, it could damage the coat.

Some exhibitors have their Ragdolls a few days before the show bath, but you can also choose a non-perfumed, greasy tartar powder.

Ears cleaned and claws cutting if is necessary.

Colour varieties: Ragdoll breed cats are recognized by FIFe in three varieties, all of which are in the colour of seal, chocolate, blue and lilac. Lighter coloured hair may go dark, due to lower ambient temperatures and licking of the coat. Local darkening of the hair may cause skin damage.