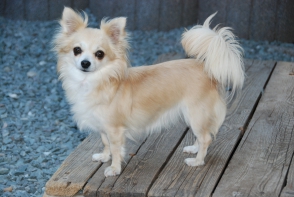 Despite its size Chihuahua is unexpectedly confident, independent and, if necessary, very confident and courageous dog. Definitely, if it is not destroyed by rough owner´s treatment, it is not fearful or timid. It is agile, to all stimuli it responds quickly and nimbly. It can be quite stubborn, but just in case that its upbringing was not the way it should be.

Tiny puppy owner often spoils. Owners often think that this breed can manage in any time till the mature. Due to its character   this tiny dog can be aggressive if it is not accustomed to respect a man, later if owner wants something from dog and dog does not want, does not like it.

It is an intelligent and playful individual. If it has been properly socialized, it is cute and gets well with other dogs and other small pets. To the owner and members of his family it is nice, but certainly it should not be treated as live toy. It has its dignity.

Just like every other dog, systematic, kind and gentle, but absolutely adamantly consistent training must already started at a very early youth all by playful method and it follows smoothly by socialization. And that is this breed much more manageable. The puppy must be gradually and peacefully accustomed to diverse environment, other dogs (when meeting strange dogs need the maximum caution, it is still a fragile creatures).

Despite the overall small size, it excels by compact body. Length slightly larger than height at withers desirable, but shorter, almost square format body, particularly by dogs (males). Bitches are allowed a slightly longer body frame (some representatives of the breed of the 70s of the 20th century. used to be elongated rectangular body frame). Height at withers is not fixed. Weight of body is from 1.5 to 3 kg. Valid FCI standard allows individuals and weighing from 0.5 to 1.5 kg.

The nose should be small and slightly pointed. It can be any colour. Requires a scissor or pincer bite. Overshot and undershot jaw is highly undesirable as well as all other anomalies shaping jaws.

The eyes are large, round, expressive, but may not be prominent. They should be as dark as possible, light coloured, although permissible but undesirable. The earlobes are large, upright, widely open and broad at the base, on the tops slightly roundly pointed. The rest are carried out to the sides, so that their longitudinal axis forms when viewed from the front to the top line of the skull 45 ° angle.

The neck is of medium length, slightly arched in the nape, dogs are stronger than in females. On the neck may be lobe. At the longhaired character it is desirable that the longer hair on it formed a "collar".

The tail should be set high, medium length, thick at the root towards the tip tapers evenly and looks flat. The way in which it is carried is an important breeding character. During dog´s motion it must be carried erect, either slightly curved or curled in a semicircle. Then the tip is directed towards the loin region, which balances the entire body. It should never be downloaded or between hind legs, or carried down and curled, but may be still hanging down at the end of a hook-up hooked. Its hair coat blends with the body of the long hammer on it forms a long coat the bottom "flag".

Chest is deep and broad. Seen from the front to be large, but they should never be barrel-shaped. When viewed from the side to reach the elbows. The forelegs are straight, the right length. They may not be too short or excessively long. When viewed from the side in normal (zootechnical) position perpendicular to the substrate. Seen from the front must be free of them on a vertical line from the elbow.

The hindquarters should be well muscled with long bones, viewed from behind straight and parallel when viewed from the side properly angled at the hip and knee joints and hock. The angulations correspond to the angulations of forequarters.

Feet should be small, oval shaped, or literally "hare" (long oval), nor clearly "cat" (short round). Toes are tight, but not too arched. Nails should be moderately long, curved correctly. The pads are very elastic. The dewclaws must be removed except in countries where their docking is prohibited by law.

Smooth character has on the whole body a short, close-fitting, shiny and soft fur. If there is undercoat, the hair is slightly longer. Thinner coat on throat and belly is permissible. Elsewhere is slightly longer on the neck and tail. In the face and ear surgery should always be the shortest. Baldness is inadmissible.

At the longhaired character must be the hair soft, silky, smooth adjacent or slightly wavy. The undercoat should not be too thick. Longer hairs are forming fringing on the earlobes, neck, behind the legs, feet and tail. Fluffy coat, standing is not allowed.

Enabled is any uniform and mottled coat colour except roan (merle).