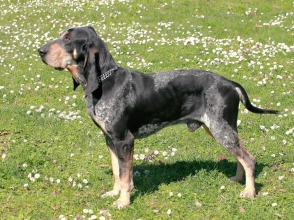 Character is a quiet, nice, friendly, sensitive, perfectly manageable dog that loves its owner. This is a versatile helper, hunter uses today as a hunting dog with a gun, and during the chasing. It was destined to hunt hares, but it is equally applicable also in the hunt big game, including wild boar.

It needs some work in the pack. Among the hunters it is a favourite even it is admired for its work style. When hunting echo (i.e. reports) by deep voice that is different by males and by females. It reports with uplifted head and for a moment while stops to then immediately issued a "low nose" (head to the ground) back on the trail.

The education and training has no significant difficulties as regards breed manoeuvrable, which also has a tendency to dominance. Usually it is a breed whose owners are hunters due to its character it may possess even one who is not interested in hunting passion.

It's a medium-sized noble hound proportional physique of height at withers that varies by males in a range from 52 to 58 cm and females ranging from 50 to 56 cm. Head when viewed from the front only very slightly above the domed and not too broad skull.

Nose must be black, with large well opened nostrils. Bite is required scissors, must be embedded in the jaws.

The eyes are oval in shape, brown, kindly expression. The earlobes should be relatively thin, Corkscrew inward curved and long, so that stretched violently forward reach at least the tip of the nose.

The tail should be thin, reaching to hock joints and proudly carried upward, like sickle.

Chest should be long and deep so that it reaches to the elbows. The chest is quite broad. The forelegs should be strong enough to properly muscled and moderately inclined with blades.

The hindquarters must be proportional. Thighs should be fairly long, muscular but not "over muscled" (sideways bulging). Feet should be oval in shape, fingers dry and tight. The pads and claws are black.

Skin should be smooth, dense black or mottled with large black spots ("patches") must never be completely bright. Visible mucous membranes must be black.

The coat is short, moderately hard and dense. Bluish colour should be. This colour effect is generated by mixing black and white guard hairs.

The defects include short head, skull above too flat, too narrow or very wide, ears short, set high or insufficiently curved too long torso, soft upper body lines, lack of substance (i.e. generally weak physique). Overbuilt back (higher than withers), tail carried on one side or the other weak bones of the extremities.