This site uses cookies. By using this site, you agree to the storage and use of cookies to evaluate traffic to this site and to optimize marketing activities. 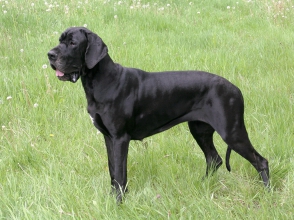 It is a confident, fearless, easy, docile companion dog with high resistance to provocation and without any signs of aggression in its behaviour. Great Dane is temperamentally friendly, kind, loyal to its owner and cuddly, especially to children. It likes playing with them and it is very patient with them. This breed is very sensitive to the mood prevailing in the family and it bothers too harsh vocalisations. It is socially based and reside in an outdoor kennel it is not suitable for this breed. Not only because like everyone else it is not haired dog i (if not heated) for the whole year there is a risk of frostbite, but also psychological reasons.

It needs frequent contact with family members of the owner. It wants to be a full-fledged member of the "pack". You can rely on its loyalty, as well as constant readiness to defend with uncommon courage "its people." To strangers it is restrained, until it is detached. It warily guards, but usually it does not bark unnecessarily.

Its education must be with nice consistency and consistent conduct there is not any major problems during education, but you must start with this breed at an early age - e.g. if it pulls on the leash, the man physically in any case is not strong enough. Mild and gentle approach can make wonders, tough training is not good way.

Owner of this breed must be talented by natural authority and must understand dog´s senses and owner must respect them. For people, who are indecisive, frequently changing opinion, capricious, it may attempt to take a leadership position in the "pack", which is the response in terms of canine natural and right, because weak leadership individual is not a guarantee of successful survival of society, it is therefore necessary to replace it. This, however, not in the case of coexistence of man and dog will never happen. People, who have no necessary leadership qualities they should never understand this breed, although people like this breed so much due to body, size etc. must have some character that was mentioned. Also, this breed is not for persons who want only push their neighbourhood. This kind of people can make this breed very aggressive and dangerous.

Early socialization is important. This breed from an early age should be accustomed to other dogs and other animals and all sorts of environments. Although it is a little generous dog may give provoke well known (syndrome of small breeds a certain period of Napoleonic complex by humans). Some adults Great Dane can show a tendency to behave dominantly to other large dogs, but it is the fault of the owner, who resolutely faced the first signs of such behaviour.

The head corresponds to the size of the overall appearance of the individual - is a long, narrow, striking, and finely chiselled, especially under the eyes. The muzzle should be deep (when viewed from the side high) and if possible square. Nose is large, rather broad than round with large nostrils. It must be black with the exception of individually mottled colouration. For those black nose is desirable but black spotted or flesh-coloured tolerated. In blue should be dark slate grey (black and grey).

The edges of the lips should be dark pigmentation, but by members of the spotted character tolerated and incompletely pigmented or flesh coloured. Oral corners are significant. The jaws should be massive, broad. Teeth are required strong, healthy and complete, consisting of 42 teeth according to the dental formula (despite this seemingly strict requirement to tolerate the absence of first premolars P1 in lower jaw!). The bite should be scissors.

Eyes are medium sized, vibrant, wise and kindly in expression as dark as possible, almond shaped with close fitting lids. In blues can be somewhat lighter in dapple may be light or different colours.

The neck is long, dry and muscular at the base (shoulder) strong towards the head slightly tapering. It is held high, somewhat obliquely tilted forward and the neck slightly arched. Withers should be the highest point of the massive hull. It consists of the vertices of vanes that extend above the mandrel (spinal) projections of the thoracic vertebrae.

Back short and firm, in almost straight line backwards slightly decreases. Loin slightly arched, broad, strongly muscled. Sacrum, which forms the basis skeletal stern to the tail set (when viewed from the side) are slightly bent.

The movement is harmonious, flexible and lightweight, limbs must be viewed from the front and the back to move parallel to each other.

Distinguishes between several different colour absorbers that according to the FCI standard divide into three varieties: the first yellow and streaked, the second harlequin and black, third is blue.

The yellow variety can be the base colour of pale to golden yellow, black mask is desirable, undesirable small white markings on the front chest and toes. The annealed variety may be the primary colour light to golden yellow with black, the most balanced and distinct brindle (stripes), which stretches along the ribs, it is desirable a black mask unwanted small white marks on the front chest and toes. At spotted variety, also called "harlequin", is the basic colour pure white, preferably without any tinge, with shining black spots of various sizes and shapes that are to be distributed evenly over the body.