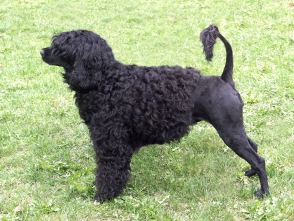 Latin canis called “piscator”, that it was indispensable helper for fishermen (lat. = Pisco fish, Pisces = fish). At the turn of the era, the emperor Augustus called this dog Canis Leo (lion dog). It was not because it was used to hunting lions, but for the typical "lion cut", which made easier swimming and the movement in the water. Back of dog´s body was not so heavy, so the dog could swim better.

It is an excellent swimmer and excellent diver. Almost always it was a faithful helper fisherman around the coast of present time there is Portugal. The dog did not only help to fishermen, but also it worked as a sheepdog and guard dog. When it is fishing it behaves masterfully, in the coastal waters chasing fish into nets, as leaked plunges and dives and returns them back, but also delivers the ropes and various objects between the boat and the shore, even for long distances.

It was once abundant in all coastal areas, today a working dog decidedly absent because fishing has been a completely different form than in the past - it became a kind of industry. For many years a truly invaluable services rendered to the fishermen, i.e. the majority of the population of the Atlantic coast, now you can see as a Portuguese national breed. Its standard was established in the 30th of the 20th century, based on the description of a dog named Leao. (that was owned by fisherman Vasco Bensaude of Albufeira)

This is a lively, exciting, proud and independent, and sometime contentious. This breed is devoted to its owner. It's soulful, lively and cheerful, able to entertain people with its tricks. When it works it is tireless and relentless, and in education and training, focused and attentive. It is getting well with other pets if it is used to.

It is intelligent and respecting the principle of consistency, warm and fairly easy to train. It learns easily and has a remarkable effort to understand instructions instructor. It loves above all water, in that it is in its element. Not noisy, it has excellent eyesight and sense of smell. Thanks to its docility and adaptability, even today, although no longer works as a fishing this dog is versatile. It is very suitable for it there are various sports activities such as agility, obedience etc. It is used even as a rescue dog and a defender. If it is held as a social breed, it requires long walks in the warm season with the possibility of swimming in clean water.

This is a medium-sized dog straight or slightly curved outlines of the body. Physical construction is harmonious, balanced and sturdy. Musculature must be pronounced. Height at withers, male from 50 to 57 cm (ideal. 54 cm) and female from 43 to 52 cm (ideal. 46 cm). Weigh of body is 19-25 kg for males and 16-22 kg for females.

The head is large, broad and proportional. The skull has to be seen from the side slightly longer than the muzzle. Occipital protuberance is pronounced longitudinal occipital crest noticeable. When viewed from the front should be back skull part a little arched. Stop is steep, behind the inner eye corners. Muzzle should be at the base (at the level of the track) is wider than at the end. Nose must be broad, fully pigmented, black in individuals of black, white, or black-and-white coloured and brown in brown. Lips should be strong, especially up front. Oral corner is not particularly noticeable. Strong jaws bite is required scissors, teeth must be healthy and must not be seen when mouth closed. Males are especially large and strong.

The eyes should be of medium size, round shape, stored far apart, slightly oblique, but may not even be stuck in orbit or bulging. Iris colour is almost black or brown. Margins fine eyelids should be black (which cannot pay in browns), the conjunctiva should not be seen.

The earlobes are set above the eye line, hanging, heart-shaped, thin and close to the cheek. The back edge slightly moved back a head. Tips shall not exceed the line of the neck.

The neck should be straight, short, on an imaginary circular cross section, muscular, carried freely and naturally. Throat without dewlap, feathering on it does not form i.e. a collar. Withers are a little higher and not noticeable, too much.

The back must be straight, short, broad and powerfully muscled. The loin is short and flow into the croup. She is viewed from the side, slightly sloping. Hipbones must be symmetrical and little noticeable.

The tail is important for movement in the water, swimming and diving, and should never be abridged. At the root must be strong, towards the tip gradually narrowing. It is moderately high set, reaching to hocks, never under them. In alertness is carried upward, circular curved so that its end may extend to an imaginary vertical line through the centre loin.

The chest should be broad and deep, reaching the bottom edge to elbows, ribs must be long, well sprung, which is a prerequisite tonnage chest. Both limbs must be in the position perfectly perpendicular to the substrate. Pasterns and fetlocks are seen from the side slightly oblique. The forelegs should be strong and straight. Front feet should be round, flat, with fingers, medium length and low-arched. Flexible inter-digital duplications stretch the entire length of the fingers and covered with long, thick hair. Hind feet are the same as the forequarters.

The coat is black or brown of various shades, or solid white. In black or brown coats, white is accepted in the following locations: muzzle, topknot, neck, forechest, belly, tip of tail and lower extremities of the limbs, below the elbows and hocks. The white coat must not be albino, consequently the nose, eyelids and inside of the mouth should be pigmented in black, and brown in brown dogs. In this breed partial clipping of the coat, when it is too long, is typical. The hindquarters, the muzzle and part of the tail are clipped, leaving a plume of full length hair at the tip of the tail.