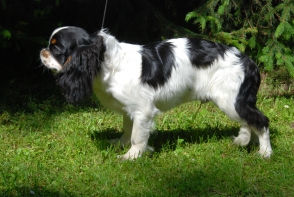 It's sweet, affectionate and playful, gentle and intelligent, radiates the joy of life. Despite the generally gentle appearance is fearless. Very pleased with staying in close proximity to its owner. If you can, try to be with it in physical contact (e.g. cuddling with it on the couch), it is happiest in your arms. It is strongly fixed on owner, and it is utterly devoted. However, its relationship to owner is not slavish, it remains game between cat and dog, it still retains its pride and dignity.

It is not a live toy, and therefore not through its gentleness and kindness optimum partner for playing with the youngest children who don´t respect this dog. Children, who play with must know how to deal with this dog. It is a companion dog and if there must be the owner for a long time away, it is very difficult for dog, it is missing owner so much because it usually chooses one person who loves, who it will be faithful to death.

The education must be based on a thoroughly good and kind attitude, but unyielding consistency. No penalties are neither appropriate nor necessary, nor acceptable. It is almost human face perfectly conveys intelligence and character creation, where such punishment than enough reprimand in a soft voice with a reproachful significantly (but never angry or even menacing!) Intonation. Indeed, the look in its eyes the great majority is enough, so it is immediately pardoned, since it is clear that it understands what is correct or not.

At an early age is recommendable widest socialization, to adjust to diverse environments and strangers, and not in adulthood timid and diffident. It is an enterprising, but nothing to be rushing headlong, everything beforehand and consider twice before. For it who will not have enough time and understanding, do better if not you must choose a different breed. Psychologically neglected King Charles Spaniel It is unfortunate, which it does not deserve. It is suitable for the elderly, who have plenty of options with its full attention and be with it most of the time together.

This is a small, elegant and quite stocky dog compact body. Weight of body is from 3.6 to 6.3 kg.

Skull should be compared with the overall size of the individual rather large, above appropriately arched over the eyes properly filled (forfeited). The muzzle should be square, wide and deep, with very short, upstanding (utter) nasal bridge. Nose black, with large wide open nostrils that heading back to the skull.

The lower jaw is wide. Slightly undershot jaw is considered physiological. Lips fitting each other precisely, the mouth must be completely closed (if not breathing dog with tongue). Tongue protruding mouth being closed it is considered highly not acceptable.

Eye slits have to be seen from the front perfectly perpendicular to the vertical axis of the face, the imaginary line connecting outer and inner corners of the eye has to be perpendicular to the longitudinal plane of head and eye slits should not be even a little steep.

Ears are set low, hanging and perfectly flat against the cheeks. They have to be very long and richly feathered hair on them is "curtains".

The tail may be docked (in countries where the law does not act to protect animals forbidden), or naturally long. Whether it's docked or the unabridged must be generously coated with a "flag" composed of long hair on the underside. It must not be carried above the top line of the body. If it is not docked, a length corresponds to the total size of the individual.

The coat is long, silky and straight or slightly wavy, but they should never be curly. Rear legs, ears or underneath the tail is long and forms a distinctive "fringes" forearms "pants" on the thighs, "hinges" on the ears and the "flag" on the tail.

The colouring can be black and tan, tricolour, red or white-red uniform. For black-and-tan (King Charles) must be the primary colour deep black and shiny, with large mahogany coloured tan markings on the muzzle, legs, front chest, on the inside of the ears, around the anus and above the eyes. A white patch on the front of the chest is not acceptable.

For tricolour colour (Prince Charles) is the basic colour of pearl white with black patches properly distributed and bright tan markings on the muzzle, legs, front chest, on the inside of the ears, around the anus and above the eyes. Wide white blaze between the eyes reaches forehead.

For white-red colour (Blenheim) is the basic colour of pearl white with well distributed chestnut-red patches. White, sharply bounded blaze stretches up to the scalp, which is at the centre bright maroon red badge (spot) about the size of a penny (about Czech coins). Uniform red colour (ruby) must be deep maroon red. A white patch on the front chest highly is not acceptable.