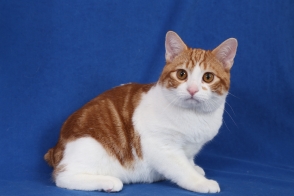 History: This ancient, native breed is originated from the island of Man, located near England, and it is surrounded by many legends. Perceptive it is the stinging or complete absence of the tail of its members. This characteristic was probably a spontaneous mutation. Isolation of the island then ensured the undisturbed development of the breed. Cat lovers became interested in cats in the middle of the 19th century. At first, only short-haired individuals and their relatives with longer hair, now recognized as a sister´s breed Kymer´s cats, people were interested later.

In the 1950s, the government of the island established the state Man´s breeding kennel to prevent the cats from falling on an island caused by such great interest. At the beginning of the 1990s the kennel was privatized and then closed due to loss management. However, the breed still has officially protected status on the island.

The Man´s cats are crossed with Kymer´s cats. In spite of their other names it belongs to one breed and short-haired Man's cats occasionally spontaneously deliver half-haired kittens thanks to long hair gene in some of their lines.

Nature: It is a friendly, cuddy and very balanced cat that eliminates peace. They are trustworthy cats that are getting well with other cats and dogs. They will learn how to walk in their harness, and some of them can help. These are particularly playful animals that love kids. Absence of a tail prevents them from being good climbers.

Body: These are massive, medium sized cats whose body forms a round and compact impression. The back is short and swings from shoulder to hip. The back legs are noticeably longer than the front and the thighs are muscular. Round head with curved profile has distinctive cheekbones and cheeks and strong chin. Wide ears are not set too high. The base is wide and open. The eyes are large and round.

The specific aspect of the cat's cat is the tail. Its five lengths are known: rumps (a full-bodied cat), a rump-riser (cat having a maximum of three cranial vertebrae and no tail vertebrae), hives (cat with a short blunt tail), longie (a cat with an incomplete truncated tail) with a complete tail. Only the first three varieties participate at the show.

Care: Man's cat hair does not require special care. Just brush it regularly and then brush it with a rough crest. At the time of moulting, it is possible to use a rubber gauntlet. The sharp ends of the claws should be cut and the ears should be cleaned if necessary.

Colourful variety: Man´s cats are breed only in natural colours of domestic cats, i.e. in red, black and blue, possibly with a coat of hair, with white spots or in pure white. All eye colours are allowed. There are often yellow, green, yellow-green tones. White cats may have blue eyes or be different in colour, with one blue and one yellow eyes.