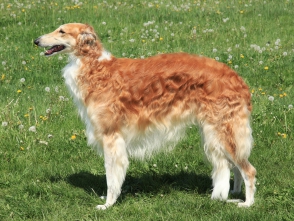 It's a dog perfectly balanced and calm under all normal situations, during the game it may be unexpectedly impulsive and in conflict cases it may be its reaction very steep. Typical for his breed it can suddenly go from rest to affect and vice versa. It is confident and fearless. Its gaze is penetrating and pointing into the distance.

To the owner and members of his family are friendly, kind and gentle, although a bit distant. It is usually reticent, as a rule it does not impose. To the children it is tolerant, but they must respect its personality and give it peace. Conflicts with other dogs it does not make if it is faced with any provocateur. This breed ignores such a dog and only then it will take if the opponent of a serious assault. It  intervenes harshly and swiftly. It barks rarely, it's a very quiet dog. It can go to the races and the sport both on the track and in the field.

It is very intelligent and docile, but absolutely does not tolerate any pressure. It needs sufficient understanding and love of the owner. Absolute obedience by this breed we cannot demand or expect, it is a separate and independent dog, it used to rely only on itself. Important is the widest and early socialization at an early age, after the takeover, launched education. Consistency is of course necessary, but it must be hospitable, kind and sensitive.

It needs plenty of room to move outside is active and quick. Because it has a highly developed hunting instinct, it cannot be free to run anywhere. When it can see the hare, immediately it starts chasing it and it is quite difficult to call it back.

This is a large, slim dog aristocratic behaviour, solid build and a slightly elongated body frame. Females tend to be slightly longer format of the body than dogs. The skeleton has to be strong, but not too heavy and coarse. Most important for the overall appearance is a perfect balance of body structure and harmonic motion. Height at withers, male is   75 to 85 cm and female is from 68 to 78 cm.

The head must be dry, very narrow and long as seen from above and from the side. It is so dry and elegant, that beneath the thin skin are clearly visible large vein. When viewed from the side, the topline of the skull and the muzzle elongated, slightly convex (curved) shape.

Zygomatic arches must be curved to the side, because it amounted to a gross head. The skull has to be viewed from above narrow, elongated oval shape when viewed from the side, above almost flat. The frontal slope (feet) can only be very slightly indicated or almost indistinct.

The muzzle must be long, full length cushioning there cannot be anywhere any depressions. Its length is equal to or slightly greater than the length of the skull. Nasal bridge towards the nose bends its lines when viewed from the side convex (domed) and forms the desired down-faced. Nose large, movable, and forward before the top of the lower jaw.

The edges of the eyelids and edges of soft thin and well to the teeth and jaws adjacent lips must be black, regardless of coat colour. The teeth are large, desirable scissors or pincer. The eyes are large, expressive, sloping, slightly protruding, hazel or dark brown, almond-shaped.

Ears must be small and thin (soft), mobile, set on above the eye-line and folded back so that they point to the occipital skull landscape and the peaks are close together or down and attach tightly to the neck. The neck should be long, cleanly modelled relatively heavily furred, the sides flattened, muscular, slightly arched in the neck and carried rather low. It should never be carried neither too high nor too low.

Withers has to be slight, back wide, muscled, elastic, forming when viewed from the side with the loin and croup cambered (convex) curve which is more pronounced by males. The optimum is considered 8-10 cm. Forechest when viewed from the side slightly protrudes in front of the shoulder joint. Loin long, arched, well muscled, moderately broad. Croup should be long and broad, slightly sloping.

The tail is low set, thin and long, crescent or sickle shape. It is richly coated. When viewed from the rear shall not be bent either one or the other side, to be perfectly flat. At the end it is not as a ring.

The thorax is on the imaginary cross-sectional oval shape. It must not show or start a sickle shape. It is so deep that it reaches to the elbows. Backwards to short floating ribs, gradually expands and when viewed from the side of its bottom line rises upwards and merges smoothly into the tucked abdomen.

The hindquarters must be viewed from behind straight and parallel to each other, their position is wider stance than the forelegs. When viewed from the side are more angulated than the forelegs. Paws are narrow, elongated oval shape (called hare) and arched. Nails are long, strong, with their ends touching the ground. For forelegs should be feet shorter than the hind limbs.

The coat should be silky, soft, wavy or forming short curls, but they should never be curly. On head, ears or front of the extremities is short, smooth and adjacent to the trunk should be long and wavy, especially long on the bottom of the chest. Neck, shoulders, back and croup a little curls. On the sides of the body and thighs should be fitting hair, wavy surface. Longer hair forms on the back of the forelegs "feathering" on the back of the thigh "pants" and on the tail-flag. All colours, except blue, chocolate brown and shades are permissible. It is possible colour uniform and mottled.