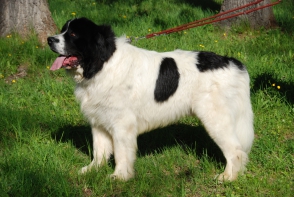 Its character is friendly, balanced, calm, obedient and affectionate. It does not miss considerable confidence. It is not aggressive, but the owner and his family members it is always ready to defend. It gets well with children. It does not seek any disagreements with other dogs and it nice to other small pets. To unknown persons, who are not suspicious it behaves friendly.

Because it is docile and clever dog, it tries to please, its upbringing it is not problematic, when the owner follows the principles of absolute consistency. By bad handling etc. you cannot manage anything it is aware of its physical superiority. Hard negotiation it is not necessary, just intonation. It must be clear, however, it must be clearly different when praised or rebuked.

Because it has great strength in adulthood it should be from an early age accustomed to walk on a leash without pulling. The adult dog stretching its size is also a mature and strong man can hardly handle with this dog. If it is running free during walk, in distant from the owner, owner must manage to recall the dog, when dog was well taught, but only just to the moment when water appears. It loves water so that it cannot resist and it must go swimming, even if it is otherwise responsive and manoeuvrable.

This breed can be all year round in the outdoor pen. Certainly it may not live there all its life. Urgently it needs a sufficiently long daily contact with the owner and his family members. It needs movement. It suits to dog free running in the fenced property.

It makes expression of a large, sturdy dog harmonious construction. Limbs, especially by dogs (males), are relatively higher than that of Newfoundland. Height at withers, average is 72-80 cm male and 67-72 cm, female. Small deviations below or above can be tolerated. The head should be well modelled and noble. The skin on head cannot form wrinkles and is covered with short, fine hair.

The skull should be broad, powerful. Occipital protuberance is pronounced frontal slope (stop) sloping. The muzzle should be at the base where the track passes the muzzle, as deep as it is long. Nose must be black. Lips are dry, the edges black. They may not be salivating. Upper bound as tightly to the jaws and teeth and slightly overlaps the bottom. A scissor bite is required. Appropriately laterally protruding cheeks merge smoothly into the muzzle.

The eyes are medium sized, almond shaped, deep set properly, the colour brown to dark brown, and light brown but tolerated. Its look is friendly. The conjunctiva must not be apparent. Distinctly bright (sulfur-yellow or grey-yellow) eyes are objectionable as eyes too close together.

The earlobes should be set moderately high, but not too far back on the head. They are medium sized, triangular, slightly rounded tops. Just flat against the cheeks. Laid forward, reaching their peaks to the inner eye corners. It covers a soft, short hair, just outside the rear of the base coat consists of a long fringe.

The neck is not on the imaginary cross-sectional pronounced circular, but slightly ovoid shape. It is muscular and symmetrical, slanting embedded into shoulders. At the base should be broad, to the head slightly tapering. Its length from occipital part to withers is equal to about 3/4 - 4/5 total head length, measured from occipital part to tip of nose. Significant dewlap is undesirable.

Body has to be broad and powerful shoulders, stern. The distance from the withers to tail should be almost the same as twice the length of the head. The back is firm and straight with loin muscular. Tail may be in motion when excited carried higher, level with the top line of the body, upward curved end. If it is deformed or curved over the back, it is a disqualifying fault.

Chest forms between muscular shoulders properly sprung ribs. Between chest and the loin should be viewed from above clearly evident sided shallow depressions. The belly is only slightly tucked up

The forelegs are strong. The massive muscles are surrounding the shoulder blade and upper arm. They grip the right angles with the bones of the limbs loose parts (from the elbow to the foot). Elbows are close to the bottom of the chest. They are quite high above the base and pointing straight backwards, must be neither turned in or out. The forearms are covered with feather behind forming a rather small "feathering".

The hindquarters must be robust, freely movable. Its skeleton has to be strong, powerful muscles (called trousers) formed longer hair on the back of the thighs are adequately marked. Thighs should be particularly wide. The dewclaws should be removed as soon as possible after birth (if this operation is prohibited by law on protection of animals).

I.e. cow hocks (in an "X" is convergent hocks) and insufficient angulations limb when viewed from the side of the defect. For locomotion must be both legs moving well, step must be spacious.

Topcoat, with the exception of the head, the front of both legs and feet long and as straight as possible and densest, soft to the touch. A slight wave on the back and thighs is not fault. The undercoat is thinner than by Newfoundland breed. Combing coat in the opposite direction of hair growth, it must immediately return itself to its original position.

The basic colour of the coat is pure white with sharply defined black patches distributed on the body and stern. The neck must be white as well as the front chest, abdomen, chest and hind legs and tail. The head is black. A very desirable feature, which should strengthen the breeding, the white-coloured muzzle transitioning smoothly to a symmetrical, neither too broad or too narrow lysine, which divides the black colouring of the head in half lengthwise and stretches to the white-coloured neck. Black dotted white coloured surfaces, which still exists, is not a defect, but it is advisable to limit breeding.