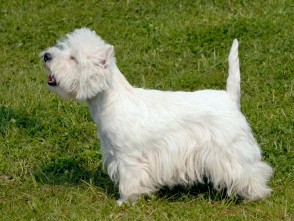 This breed is a small, active, playful, tough dog of a rascal expression. It is gifted by considerable confidence and vigilance. It's lively, utterly fearless, bold and confident, very friendly, even to strangers, utterly soulful. In contact with other (perhaps much larger) dogs it behaves quite masterfully, but never if it was properly socialized and bred, it never provokes and minds. With the passion it chases alien cat but it never kills.

Despite its size it is the powerful watchdog. All unusual and notify of any unauthorized access it reports by loud barking. Although it was originally a hunting breed, it is now almost exclusively a companion dog. It is ideal for anyone who likes a small, cheerful, mate and live a loving companion. For all different games and activities it spends on a lot of energy.

It needs an owner who is a true leader of the "pack", a man diligent, gifted by  natural authority, acting quite consistently capable of own will subtly but insistently promoted under any circumstances. It can have a tendency to take over in the society a leading position by the owner who has not this character. Usually this will be reflected by the as a defender "pack" pugnaciously attitude to other dogs, but problems can also occur with its  behaviour to the people. It's not dog´s  fault, but the  owner´s fault, a consequence of the mistakes committed by improper upbringing and keeping a dog and it can be  allowed to develop the syndrome  of small dogs (equivalent of a Napoleonic complex  by humans).

It is small sized Terrier powerful body, what has the image of the perfect combination of strength and activity in small. Height at withers is approximately 28 cm.

Head thickly coated with hair and carried so that its longitudinal axis forms when viewed from the side with the axis of the neck right or slightly smaller angle. It should not be too extended position. Distance from occipital area after the junction of the inner corners of the eye is slightly greater than the distance of this point and nose. Skull should be slightly arched above. Since the deployment of the ears to the eyes is narrowing slightly. Contour lines of the forehead should be smooth. The frontal slope (stop) must be distinct, highlighted bony ridges that protrude slightly. Between the eyes is a shallow depression.

Muzzle is a line from the inner corners of the eye to the nose gradually narrowing. Under the eyes cannot be sunken, or do they fall steeply down, they must be well filled. Nose black and fairly large, but does not protrude when viewed from the side of the front edge of the muzzle in front tops jaws. They are strong and symmetrical, the canines so broad as to achieve the desired rascal expression in its face. Teeth should be in proportion to the size of a large dog. Required regular scissor bite is required, which means that 6 upper teeth closely overlies down 6 teeth, both of which are vertically embedded in the jaws.

Eyes should be stored in eyecups adequately far apart, medium-sized and dark as possible. They may not be bulging, should be saved rather deeper. This reinforces the bushy eyebrows which gives them an intelligent, shrewd and enterprising expression. Ears should be small, erect and rigid, pointed at the tops, placed not too far apart (low), nor too close together (high). Coat on them   should be short and smooth (velvety), should not be cut, but from an early age gently trimmed be fingers. At the peak it may not form tassels. Earlobes atop rounded, broad, large, thick, or of long hair are extremely undesirable.

The neck should be muscular and long enough to allow the required head carriage. Gradually expands toward the shoulders and smoothly passes into them. The body must be compact, straight. Loins are broad and strong. Chest is deep.

The tail should be long, 13-15 cm, covered with harsh, but not overgrown hair. Always free "flags". It should be as straight as possible, carried up, cheerfully, but not too brightly. The dog it does not sway from side to side and you have rewound over the stern and shoulders. Too long tail is undesirable and must in no case be docked.

The hindquarters must be strong, muscular thighs and wide. Their loose parts are short, well muscled and sinewy. Thighs should be very muscular and the position would not be too far apart. Hocks are sufficiently bent, just under the body and in attitude on the move quite close together. They are highly undesirable steeply bent or weak.

Front feet should be larger than the hind paws limbs, rounded shape, reasonably large, strong, thickly padded and covered with short harsh hair. Hind legs must be smaller, with thick pads, which are like black nails. The gait is free, smooth and straight.

Action forelegs must be free and hearty - from shoulder. This is also the action of hind legs, which are also for locomotion rather close together. Knee and ankle must be very flexible. Hock engages in action far below the body (forward) and does so from a source limbs vigorously forward pulse (echo). Stiff stilted action hindquarters are highly undesirable as – cow (when viewed from behind convergent) hock.

The skin must be free of any hassles, clean and completely healthy. The body coat consists of a top coat and undercoat. The outer coat consists of rough, about 5 cm long hairs without any ripple. Resembling fur undercoat is short, soft and close. (Sticking) of hair is evaluated as highly undesirable. Coat colour must be white.