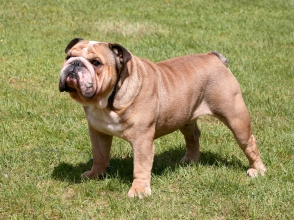 It is absolutely calm, good-natured, gentle, peace-loving, kind, intelligent, but also very sensitive dog. It must give the impression of determination, strength and activity. Despite its   gloomy appearance is spontaneous and cheerful and thoroughly friendly. Although it seems cumbersome and clunky, it can develop surprising speed (defending) and endurance (e.g. walking).

It can be cute, but too dour and again contrary to its habit, it can be surprisingly courageous. Attentive, bold, loyal, dependable, but if it is necessary, e.g. If it is attacked, it is changing in fierce opponent. It gets mostly calm and, indeed dignity, it does not mean that it cannot be happy.

With children is tolerant, generous and patient. If it is a chance, it is willingly playing with them. In old age or when it is unsuitable weather (high temperature and humidity), do not make it play.

Definitely it does not belong to the outdoor kennel, it needs to be a full member of the family - "pack". Constant contact with people is very important for it, then "its" family loves and is almost always helpful and loyal.

Without any special training is a reliable guard and defensive dog. The youth dog is much more alert and active, when it is getting older and as the elder it does not like disturbing. It may also be less tolerant to other dogs, particularly intrusive. The owner should count on that and give it at this stage of life, plenty of rest.

It needs proper socialization from early young age, it gets well with other dogs, but also cats and other domestic animals. It does not enjoy too tiny small dogs.  It deals with them simply so that it usually presses them to the ground ("knock down" it makes the other dog give it up) without being bitten them game is over.

By reasonable approach and a bit of stronger strictness is not difficult to deal with it. It willingly responds to intonation of voice and even though the command was not learned, it is trying to understand and comply with. Each hardness in its training must not be necessarily cruel. It puts up with well handling, nicely, limited training by smooth way, positive stimulation.

Neither beginner respects the basic rules of training (especially dealing) would it not be with a bit of patience and understanding any particular difficulties. But never count on the fact that it brings out blindly obedient dog. It is English bulldog - the "personality" but enough, it is well controlled.

It's has to be stocky, rather short-legged, squat, powerful and compact dog whose head is in proportion to the body is relatively large. It must not, however, like any other character, dominate the overall appearance to the extent that the desired balance was disrupted exterior deformed character or adversely affected the mobility of individuals. Females are not as big and powerful as dogs.

Weight of body is by male 25 kg for female 23 kg. The head is viewed from the side of the occipital region to the tip of his nose very high and short, face to be areas ,in the face and around it are small loose skin wrinkles, but they must not be neither too strong, nor does it not overlap. Browridges should be prominent, broad, square and high - it works for Bulldog-gloomy expression. The skull must be viewed from the front very broad, square and from the angle of the mandible after its top (back skull) is very high, its circumference is large.

The nose is large, always black, should never be liver brown, red or brownish. In the middle is divided into distinct front straight vertical groove, the top is facing upwards and slightly backwards, towards the eyes, nostrils are large, wide open, lips should be thick, broad, pendant and very deep.

The tail is carried down up (without its tip curved upward), never above the topline of the body. Coat is short, must not be rough, or on the bottom side longer.

The chest should be broad, considerable diameter, rounded at the sides, behind the forelegs on an imaginary circular cross-section. The chest should never be flattened from the sides, as the ribs must be well sprung. It should be spacious and very deep, between forelegs reaching close to the surface, ribs, extends far back.

Colouration can black "mask" or without brindle, red (various shades from blond over red deer), white or pied (i.e. White in combination with any of these colours). The colour should always be bright, clean, non-pigmented nose is as black and black and tan colour highly is not acceptable.