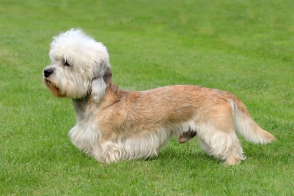 It is playful, cute, sweet, extremely sensitive, affectionate, but also very intelligent, independent, alert, as well as appropriately tough, persistent and determined, but also sensitive dog. It can perfectly recognize atmosphere prevailing in the owner´s family. People are sad or bad mood subtly and unobtrusively it can make them happier. With its family is loyal and affectionate.

It is also a social, tolerated well with other (and unknown) dogs only some males may have called syndrome- small dog, which means that they tend to provoke more dogs (usually of the same sex). It is friendly with children and courteous, but it is not always willing to play with them. With pleasure playing when it is in good mood, but it should not make to play. It prefers older children.

It has its pride, and its behaviour is usually decent. But never timid, and one should not leave the mistaken its impression that it is a dog that does not want to damage its topknot decoration on the head, topknot consist of soft hair. It can act very boldly, as a dog used for hunting in the past, even hunt the otters, it is not unexpected.

When this breed from youth is led by the right manner, it is obedient, but kind of consistency in its upbringing is necessary. Education is not entirely easy. Especially some individuals have despite its considerable size ambition to occupy the highest position in society. Therefore this dog needs owner not only consistent, but also endowed with an innate authority, which can be applied at any time peacefully, with it who is acting quite consistently, calm and balanced, but also decisive. Mistakes in education will be reflected later. Then the dog's behaviour can be very confident and enforced if something on it, reacts harshly. Therefore, it is necessary to start with education at an early age in a playful way. It is necessary that this breed must always see his owner as a right leader "pack", and then it is a unique and beloved companion.

It is warily guards by barking and timely attention to all unusual, what is happening in the area. It cannot live in an outdoor kennel; it is suitable to the apartment, even though it begins quite actively.

It is short leggy dog and a member of the Terrier group unusual appearance, with a relatively large head and with beautiful large eyes, elongated badgers body, whose contour lines form curves rather than straight lines as most other Terriers breeds and short, strong legs. Weight of body amounts is individuals in working condition 8-11 kg.

The head should be powerful, large but in proportion to the overall size of the individual. It is covered with soft, silky hair that is not limited to a light-coloured crest on the upper side of the skull. Very typical are the large wise eyes , intelligent expression. The muscles controlling the lower jaw are exceptionally strong. The skull is wide between the earlobes and towards the eyes narrowing. The distance of the line between the inner corners of the eye to the occiput is roughly the same as the distance from the base of one ear lobe to the base of the other so that the skull is about as long as wide.
Nose must be black. The length of muzzle to length of skull has about a 3: 5. On the back of the nasal area is bald triangular in shape with a broad base of the nose about 2.5 cm tip pointing to his eyes.

The jaws are strong, with perfect, regular and complete scissor bite, upper teeth closely overlapping down ones, both of which are fitting in the jaws. Teeth are very strong, especially canines that a dog of this size to be extremely powerful. Upper and lower in fits and allowing the strongest bite and, if necessary, firm hold.

The eyes should be bright hazel, stored in eyecups low and far apart. They are big, bright, full and round but not protruding, special dreamy expression, sometimes referred to as the most beautiful dog eyes at all. The earlobes should be suspended, set back quite far apart (low). Adjacent to the cheek, only slightly protrude bases. In place of deployment they are wide and narrow almost to a point. Their front edge falls straight down to the highlights.

The neck is very muscular, strong and powerful, strong and firmly embedded into the shoulders. Body has to be a long, well muscled and supple.

Topline body is in tap low enough for him faintly uttered, then rises slightly and adequately spans the arch over loins, from the top slightly and slopes gently to tail.

The tail should set neither too high nor too low. It should be rather short, long, 20-25 cm, rather thick at the base and about 10 cm, then tapers to a point. Not twisted or curled, but curved around like a scimitar. When excited, its end is bent perpendicular to the supported portion that is closer to the root. The rest is carried gaily, slightly above the top line of the body.

The chest must be properly shaped by and between forelegs reaches low to the ground. Feet should be round thickly padded and smaller than the forequarters. Nails should be dark, darker than coat colour. Flat or open feet are considered extremely undesirable. Rich source of motive power forward (powerful reflection) are hind legs. Provide smooth, loose, lightweight, long forelegs event that reaches far forward.

Hair is very important feature of the breed. Double coat with a soft linty undercoat and a harder topcoat and not wiry but giving crisp feel to the hand. The coat should not « shed » down the back, but should lie in pencils caused by the harder hair coming through the softer undercoat. The forelegs have feathered about 5 cm (2 ins) long. Upper side of tail covered with wiry hair, underside not so wiry with neat feathering of softer hair.

Mustard: Varies from reddish brown to pale fawn; profuse creamy white “topknot”, legs and feet of a darker shade than head.
In both colours, the coat forming "fringes" behind forelegs rather lighter than hair on their front pages. Little white coat from the front on the chest is admitted as white nails. The white-coloured fur on the paws is undesirable. On the underside of the tail hair should be lighter than on its upper side where it should be darker than the trunk.