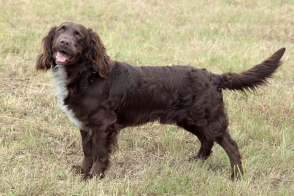 Despite the obvious developmental history of the German Spaniel this breed began the attempts to be organized for breeding in the 19th century. It was a natural breed, formerly common, it became rare because of its popularity hunters gradually replaced by versatile hounds.

Originally German Spaniel was bred and it is exclusively spread today as a flushing dog, currently it works also, as a versatile hunting dog. During the hunt it works passionately, extremely zealous snooping, it always has the desire to work and doing it with great certainty, it excels in fine sense of smell. It is s an enthusiastic retriever, happily brings hunted preys.

It suits with work in the fields and in the woods and in water and hunters with this dog also flushed well on the field i.e. varmint, foxes, etc. As an origin flushing dog, it does not inherently wake up wild animals, but some instructors it can learn to manage. It is very reliable for seeking scent tracks, nowadays it is used to hunting hares. It is mostly used in forest areas with ponds. In this time not many hunters are interested in this breed but it became very popular as a companion dog. It has all qualities to become companion dog, it is intelligent, docile, lively, friendly, calm, confident and docile. It is bursting with energy, playfulness and a friendly to children. It is nervous or aggressive or timid.

It requires long walks, loves water and is an excellent swimmer. Despite its extraordinary hunting and temperament qualities, it is still fairly rare breed. Hunters outside the country of origin (and in it) used to flushing dogs they often prefer the island's relatives, however, recently it became great popularity in USA. There is currently valued it as a hunting dog, that is also an excellent companion.

From beginning puppies were bred only brown (sometimes with white markings and sometimes white-brown), here and there, also with small tan markings on the head and limbs. Roan (Roan) colour appeared later.

It is a medium-sized, long, very muscular dog with noble head and strong bones. The body length should be slightly larger than height at withers in any case not be leggy. Withers height, male is 48 to 54 cm and females 45 to 52 cm. Weight ranges approximately between 18 to 25 kg (females are somewhat lighter).

The skull is flat above moderately broad, no marked occiput, frontal slope (stop) should be gradual. The muzzle must be strong, full length as wide and high, it should never be pointed at the end. Its length is the length of the skull is 1: 1, it must never be shorter than the skull, bridge of the nose is broad and toward the nose slightly bent downwards (in a gentle down faced).

The nose should be large, dark-coloured, with wide open nostrils. Typhus is considered a defect. Lips are straight, dry and tightly fitting to the jaws and teeth. Their pigmentation corresponds with coat colour. A full set of 42 teeth according to the dental formula. Upper teeth incisors overlap tightly down teeth and scissor bite.

The teeth are large and strong. Cheeks should be dry. Zygomatic arches protruding to the side. Eyes should be brown, as dark as possible, medium size, rather oblique, nor the bulging or sunken. Eyelids tight fitting to the eyeballs, their edges are feathered. The conjunctiva must not be apparent.

The earlobes should be mounted high and wide, flat, without a hint corkscrew twist along the long axis. They hung just behind the eyes and may be neither strong nor fleshy nor as a rag. They should be equally covered, which extends beyond their inner edge.

The neck should be strong, particularly in the neck powerfully muscled, gradually expanding towards shoulders, and flows into the body. Its axis should be the top line of the body obtuse angle. The neck should not be even a hint of skin or even lobe. Topline of body straight and level. Withers has to be strong and powerful, back short and firm, without any dip behind withers. It should not be - Overbuilt (higher than withers).

The tail is set at the upper line of the body and forms a smooth continuation. The rest is carried horizontally or slightly drooping, when excited, a little higher, above the topline of the body, and live with while moving.

The chest is oval when viewed from front and as viewed from the side reaching below elbows. It has to be a long, well sprung, neither close nor open nor flat. The bottom line of the body from last rib towards the rear slightly rises. The bottom side of the body should be densely covered by protective hair and undercoat.