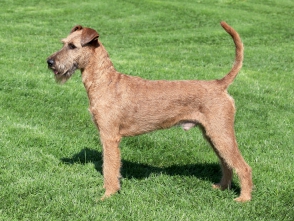 It's active, lively, alert, agile, resilient, cheerful and playful dog, but also and above all courageous. It does not feel a fear. It can make respect with other even bigger one dogs. If it could be attack by other dog it can immediately make reverse attack.

It is said that it starts fighting in dog show ring, but it is not right. It was all caused by spoilt dogs that were brought up by non experienced owners. If required by the circumstances, it can be hard and uncompromising dog, it never refuses any challenge to fight, but it is loyal companion to this owner, that it can be educated well.

Good educated Irish Terrier is exactly what it was once described - „the poor’s guard, the farmer's friend and gentleman’s darling." Harsh methods during its education and training are useless, or it would not be any good, it would only hurt. It requires sensitivity and understanding. Broad's early socialization is very necessary, especially if it has to live in the company of some pets (rats, guinea pigs, rabbits). If it can tolerate "owns" a cat, it does not mean it will not be chase strange cats.

It loves children and it is a tireless companion of their games it never hurts, and if it bothers, it prefers to move away. Its hunting abilities are still alive and if it can chase animal furred or feathered animals, it will do everything about that to hunt. Even if in other circumstances it is very manageable, however, it is better to keep it on a leash. It is intelligent and docile, well suited for agility. Dog sports requiring speed and agility, but also for dog   therapy dog and dog rescue work.

Must be thick enough (enough substance), but it also may be clumsy because of the speed, endurance and power it was for its original practical usage essential. It should never be neither coarse nor too chunky, should be a quick and elegant. Height at withers 45.5 cm, weight of body, male is 12.25 kg and for female is 11.4 kg.

The head is long and the skin on it then it never wrinkles. Skull should be above flat and rather narrow between the earlobes. Towards the eyes it is narrowing slightly. The frontal slope (stop) is gradual and from a different perspective than from barely noticeable. Nose must be black.

Lips are tight fitting the jaws and teeth, their edges are almost black. Jaws should be strong and their length must allow a hard bite. Mandible controlled appropriately powerful chewing muscles. Teeth should be strong and healthy, arranged in one continuous line. Upper teeth closely overlapping down ones desirable, but scissor bite. Cheeks not too full (not to be buckled sideways) and under the eyes should be only slightly "sloping".

Eyes must be dark in colour, small, not bulging, full of life, courageous and intelligent expression. Yellow or light coloured eyes are most undesirable. Ears should be small, "V" reasonably strong, properly set high and tilted forward so that the inner edges fit tightly to the cheek. Line of the folded ear should be well above the level of the top line of the skull. Earlobes hung on the sides of the head, e.g. with hounds or semi-erect undesirable. Coat them should be short and darker than the trunk.

The neck should be fairly long and gradually expands toward the shoulders. It has to be properly mounted. Throat is without dewlap. On both sides of the neck there is seen slightly undulating boundary between the hair growing on the neck downwards and that which grows on the neck upwards, reaching almost to the bases of the ears.

Body has to be symmetrical, neither too long nor excessively short, back strong and straight, with no signs of decline at the withers. Loin is muscular, slightly arched. Female may be slightly longer in loin than dogs.

The tail should be set on rather high, carried gaily (erect), but not flipped over back or curled. It must be adequately strong and fairly long. Customarily docked to 2/3 its original length, is densely covered with coarse hair that is neither ragged nor does not "flag". In countries where tail-docking is prohibited by law to protect animals, may remain naturally long.

Chest deep and appropriately muscled, but not too bulky or large. Ribs are well sprung, rather than too long arched.

The hindquarters should be strong and muscular. Upper thigh, knee moderately angulated, hocks low to the substrate. Feet should be strong, shortly oval shaped, quite small, with arched toes. They may not be turned in nor out, are desirable nails black and wear pads healthy not rimose without the horn growths. The move would be aimed both pairs of legs straight ahead.

Elbows for locomotion move parallel to the median longitudinal vertical plane of the body, free of the sides of the chest. Knees should not be in or out, neither in nor out.

The coat should be thick, wiry, though brittle, but always adjacent area. Individual hairs grow so densely that you cannot see the skin

Coat must not be soft, silky and so long as to hide the contours of the body, especially on the hind legs. Not to be wavy or curly. At the head must be the same as on body but short (about 7 mm long), almost smooth and straight. But not long beard is formed (compared to the rest coat) longer hair, the only one which is admissible and breed typical. If the form of "goat beard", it means that permeates unwanted hairs silky coat.

Limbs are no "feathering" and not "trousers", as well as head covered with hair of the same quality as in other parts of the body, but slightly shorter. In comparison with other large sized Terriers, its coat is the shortest of all. The colouring should be uniform. It is preferred bright red, wheat (shades of ripe wheat) or yellow-black. Front chest there may be a white spot.