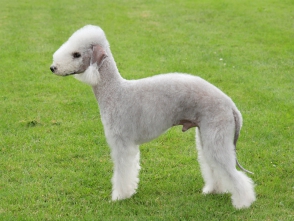 Bedlington terrier is a lively, playful, fearless, faithful to owner, bubbly, confident, good-natured, affectionate and intelligent companion dog with a stately manner, and with distinct hunting instincts. It must not be shy or nervous, much less aggressive. At rest, the mild and gentle expression, in the heat of passion, however, it is very brave. Nobody should be mistaken by an elegant and seemingly disinterested cavalier misconduct, but it is - courage, focus, sharpness, and similar features are certainly it is about its character.

It is used to be hunting breed, hardworking, tireless, determined and good strength. It used to hunt the otters, which are fast and agile, brave and hard animals. Hardly any other breed could hunt these animals like Bedlington terrier. Hunters who used this breed, they appreciate its enthusiasm, hard work and boundless passion to work. Although the whole day Bedlington terrier works extensively for hunting foxes, rabbits and otters, it does not show the slightest signs of fatigue and, by night resting and sleeping time, it is always ready in full force for next hunting day. It acts with extraordinary eagerness to hunt in the field and in the woods and in water. At all times it is willing and glad to work, helps hunters. Breed with great hunting skills, scent that never lost, even though it is not a long time use for hunting. It is recommended a leash for walks.

The education and training is relatively easy if the owner is nice but slightly strict. It does not seek any conflicts with other dogs. In comparison to the most other terriers it barks a little. It can play tirelessly and for a long time with children, it deals with them well.

It's quick and handy, because a good and relatively quickly learns, it is also suitable for training and agility. Dog sports are suitable for its size. Coat requires perfect care, you must spent much time on grooming, and you must know grooming standards and have aesthetic sense. Grooming is not about dog shows where the dog can take place but it is also owner´s record.

It's a charming dog and seemingly gentle appearance, muscular, without the slightest sign of weakness or coarseness. The length of the body is slightly larger than height at withers (body frame is short rectangular), which amounts to approximately 41 cm, females may be slightly smaller, slightly larger dogs. Weight of body is about 8-10 kg.

Head pear-shaped (without narrowing occurring in certain varieties of pomes) or (approximately) tapered shape. It is covered with a rich, silky hair that forms on top of a crest almost white. Facial expression is to be kind and gentle, the skull must be narrow, but deep (high) rounded. The frontal slope (stop) missing when viewed from the side a line extending from occiput to tip of nose monolithic arc that should never be broken. Under the eyes of the skull is properly filled (not hollowed).

Lips fitting to the jaw and teeth, and should not be pen dented. Jaws are long and the forward taper gradually. The teeth are large and strong bite scissor required, which means that upper teeth closely overlapping down teeth both of which are fixed in the jaws.

The earlobes should be adequately size, shaped hazelnut low, flatted  fitting to the cheeks, thin, velvety to the touch, covered with short, fine hair except peaks on which the long tassels of whitish silky hair.

The neck is long, toward the head tapers towards shoulders expands and smoothly passes into shoulders. On the neck no flews. The head should be relatively high held. The body must be muscular and remarkably resilient. Body topline is distinctly arched in the lumbar spine and forms a natural start to this vault, which is its highest point.

The tail should be moderately long, strong at the base towards the tip tapers. It should be set low, elegantly curved, but never over back.

Chest deep and fairly broad, rounded surface ribs are long, so the chest reaches to the elbows. The bottom line of the body in the landscape of the abdomen compared arched loin significantly extended. The forelegs must be straight when viewed from the front of the elbows farther apart than at the level of the feet. Shoulders should be oblique and muscular surface, pasterns long, (when viewed from the side) angled, without any signs of weakness (it must not be i.e. stepped down, "soft").

Paws are elongated oval shape (“hare"), strong, tightly knit padded. They should be healthy, free of cracks and the horn growths. The hindquarters must be muscular and appropriately long look longer than forelegs. Feet are the same as forefeet. The movement is very typical - when the need to develop higher speed the dog moves seamlessly gallop, which is already evident from the structure of the body. Action quirky limbs, slow steps should be rather short, light and flexible at higher speed becomes slightly rocking.

The coat has a specific character: a dense, reminiscent lint, clearly detached from the skin, but not wiry. It has a pronounced tendency to twist, particularly on head (with the exception of the ears). Colouration may be light blue, pale liver brown or light sand, with light tan markings or without them. Because of genetics  for all individuals is a dominant allele for whitening of dark pigment, puppies are born dark black or brown and gradually are getting brighter. Darker pigment to be encouraged.

Faults from the standard requirements must be considered as defects and evaluate accurately the degree of seriousness with regard to the health and welfare of the dog or bitch.