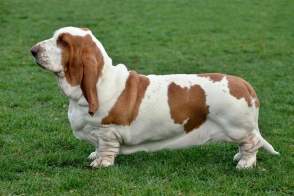 Character is balanced, gentle and kind, gentle and sensitive (it can feel perfectly the mood of the owner), good-natured and sociable (loves solitude and certainly not permanently in outdoor kennel), patient and calm, peaceful and well-mannered by nature. It is ever coward, aggressive, spiteful and morose. However, it is also very independent and confident, sometimes it may seem stubborn u, due to the fact that while it is  hunting it is used to have own judgment and rely only on itself, not wait for the command  by owner. The owner is still very dedicated and if the owner is endowed with abilities that characterize good pack leader, Basset Hound never tries to overtake owner´s place.

Its training is not easy, requires the owner of a gifted characteristics that make it a true leader society and hearty positive incentives, praising and encouraging voice of a proper intonation and snacks, preferably those which it loves, special snack that it never gets only during training.

When you exercise in hunting distract its attention to a variety of smell, sound or optical sensations that registers as a hunting breed it has a natural tendency to constantly vigilant monitoring of the environment in which it would be possible to meet with the game. The task of trainers therefore is to make it able to become what is currently the most important incentive - to keep its attention. This means, among other things, Basset cannot be bored during such work. It is advisable to alternate exercises and not repeat ad nauseam ever single. It is best to deal with the training of a quiet, well-known dog and fenced land.

This is a balanced, powerful short-legged hound matching substance (forces) with substantial (though not excessive) amounts of loose skin on the entire body. Basically, it's a big dog on short legs. It is important that suffered as a hunting dog work load that from it at work in hunting requires and expects, and that it was for hunting is sufficiently strong, agile and very persistent. Height at withers is 33-38 cm.

The head must be viewed from the side of the muzzle nearly parallel with the imaginary extension of the upper line of the skull. The nose can be seen in profile, slightly covering the front of the lips and is usually completely black. For individuals may be light coloured brownish or brownish. Nostrils large and wide open.

Jaws should be strong with a perfect, regular and complete scissor bite, which means that upper teeth closely overlapping down teeth both of which are fixed in the jaws.

Eye slits have to be roughly rhombic shape, the eyes may be neither protruding nor sunken in orbit. Iris are dark in colour, but in subjects with light coloured hair can be a lighter colour. Eye light-coloured or yellow, however, it is a big mistake. The view has to be quiet for long. Conjunctiva of the lower eyelid is visible, but not too exposed.

The earlobes are hanging, set low, just below the eye. They must be so long that stretched ahead without violence reach a bit over the top of the nose, however, it should not be overly long. The entire length of the narrow and twisted neatly into the Corkscrew, very flexible, soft to the touch, "velvet".

The neck is muscular, the arched neck properly, the appropriate length, the throat with a strong lobe, which, however, it should not be overly large. The body has to be long and full length deep. Withers and hip bumps are approximately the same height. Back straight, fairly broad. Topline of body from withers to hip bumps should not be too long. Loins may be slightly arched.

The tail is set at the correct level, rather long, strong at the root towards the tip tapers. On its underside it is somewhat rougher. The motion is carried erect, graceful sabre. It should not be carried too gaily (flipped forward) or circular curl.

Forechest should be seen from the front adapted to the curvature of the forearm. Tip of the sternum protrudes (when viewed from the side) front edge of the shoulder joint. The bottom line of the body must be in a lot of chest ever so remote from the substrate, so that the dog can move freely without problems in any terrain.

Legs are short, powerful, strong bones. The skin on their distal portions forming folds, but must never be exaggerated. Elbows should not be turning neither in nor out. The forearms are in their proximal portions angled slightly inwards, but not so as to impede the free movement of limbs or limb to touch each other in position or in motion. The hindquarters should be powerfully muscled in attitude rather far apart. Insteps on the skin can plait and rear hocks can form a clear "pockets", but not overly large. Knees must be properly bent, hocks should be low over the base, and slightly bent when viewed from the rear nor the convergent or divergent.

Both limbs paws are big, jointed fingers and fixed padded. They may be directed straight ahead or be slightly curving, however, always be perfectly balanced.

The coat is smooth, short and fitting should not be too fine. An outline of the body to be distinct (sharp), without any longer (projecting) coat. Long or soft hair, which formed the so-called. Feathering behind forelegs. Pants back of the thighs, would be a major fault. Colouration is generally tricolour (black and tan with white markings) or bicolour (lemon yellow with white), but also any other usual with hounds is acceptable.