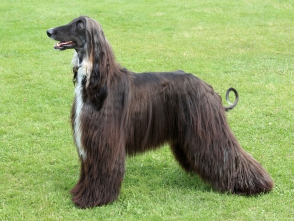 Afghan hound arrived from Afghanistan but as a cultural breed was originated in Europe - the UK and FCI considers this breed British. Its ancestors are the original local varieties of oriental greyhounds from the territory of Afghanistan. The first greyhound was imported from Afghanistan to the UK under various names for example - Greyhound of Bamian or Barukhzy (Barakzai) Hound, occurred in the early 19th century.

Character of Afghan hound fearless and racy, it behaves with dignity and its distinctive oriental expression is manifested by looking "through" one. It gets usually distant, impassive face but sometimes it can be appropriately passionate and acrimonious. Nobody must think that it does not enjoy playing but it must want itself. It moves gracefully, smoothly and flexibly, underlining its overall appearance proud. When it gambols, it is very fast and always handsome. Its greatest ornament is beautiful, perfectly combed the entire length, flowing, long and properly groomed coat but you cannot forget that just as important is  perfect and appropriate building strong bones; dog is not suitable for everyone. It needs early socialization and welcoming, training. It is suitable for people not only who are quiet, discreet and talented but for people with natural authority that they can at all times completely non-violent way  exercise and also they are blessed with empathy. People are sometime saying that Afghan hound is stupid dog BUT is not truth. They are usually people who have no experience with this breed or have experience with other breeds.

Like every greyhound needs necessarily a lot of movement. It can participate in races on the track (racing) and race field (coursing) which also assumes the necessary training, both on the track where possible. Every week or every 14 days and daily fitness. Ideal are adequately long, brisk pace, walks with the dog on a leash. This walk is for Afghan hound more physical exertion than the free-running which has at its speed. It has a lot of time due to its speed to wait for the owner and relax.

In addition, it also prevents from escaping due to potential prey (e.g. hare).

Some owners spend time only on dog shows and others racing. This is so because among other things, that the rich coat prevents the dog show champion from reaching the proper speed during the race while poorer in coat racing champion hardly fascinated at the dog show.

The head should be very noble, proportional (balanced), cleanly fashioned and lean, which means that it must ultimately adequately long and moderately broad, so that was not too narrow and fine nor too broad and coarse. It is demanded complete a perfect regular scissor bite, which means that 6 incisor upper teeth closely overlapping 6 incisor down teeth. Level bite is also tolerated. Level back , moderately long and well-muscled, loins are straight, broad and rather short and slightly falling towards the tail set to be appropriately long and slants to the tail; it shall not be too short, tail must be set lower and at the end curled into a small single ring ( Ringed Tail). Shoulder Blades are oblique so that their tops upwards and backwards and they should be well muscled but not too much .Shoulders cannot be bulged.

Elbows when viewed from the side are located on an imaginary vertical line running from the top of the withers; fit close to the chest, they must be neither turned in or nor out. Wrist should be flexible. Feet should be large and round, as long as wide, whole coated.