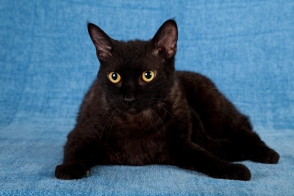 History: La Perm is Rex Breed, although it is not associated with another Rex´s variety. In 1982, naked kittens were appeared in the litter of non-pedigree American cats in the United States, with hair that was growing at the age of eight weeks. It was curly, dense and delicate. Due to their existence, several curly kittens were bred in the following years and they became the founders of the breed. Since the hair curly hair is dominant, crossbreeding with other cats was predominantly given mainly kittens with curly hair.

Nature: Perm Cats are friendly and cuddy, they like people companion and other animals. They are curious, lively and enterprising cats that like to play and welcome access to outside. They are familiar with their hunting skills. Thanks to longer hind legs it can also jump.

Body: Although the Perm Cat are coming from non-pedigree cats, its appearance is oriental. The medium-sized, slender and well-built body is elegant and athletic. It is set on longer legs with rounded paws. The long tail narrows to the tip. The neck is long, the head is broadly wedge-shaped with a protruding nose. Large, distinctive eyes are almond-shaped. Ears are set far apart.

Coat: Although the Perm Cats are born hairy, they lose their hair soon, and the new dense, silky, hairy coat grows afterwards. Thank to texture of hair the touch is not like silk but rather reminds of mohair. Short-haired Permian Cats have more noticeable fur texture. The coat is light, airy, soft and flexible. The undercoat is not dense. It is depended on the season, hair changes, but it should be wavy. The longest is around the neck. Longer curly fur is also on the inside of the ears. While long-haired Permian cats have a tail wavy, the tail of short-haired Permian Cats is more like a brush.

Care: The hair of Perm Cats does not require much care, as it almost does not. Occasional brushing is good for hair. It is necessary to cut claws and clean the ears if needed.

Colourful variety: All coat colours and badges are allowed, including badges, sepia and mink.