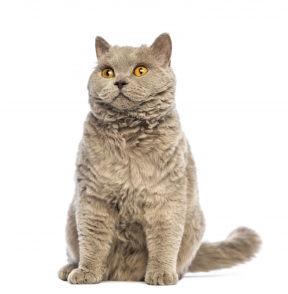 History: In 1967, a tortoise cat with white (calico) kittens was born in Montana, one of which had curly fur and wavy beards. The cat was included in the breed and three of her litters had six kittens of curly hair, which revealed that this sign was genetically dominant. The breed was originated in 1987, when both the short-haired and the long-haired variant Selkirk Rex were existed. The purpose of the breeding was to get distinctly different from the type of Rex-recognized cats so it was decided to breed only Persian Long-haired cats and Exotic Cats. This effort eventually resulted in a cat with a sub-compact, compact construction. Since it is a young breed, it is still permitted to crunch other breeds.

Nature: Selkirk Rex is a friendly, friendly cat with a good-natured character. It likes human society and it is also suitable for families with children. With other cats they get well and with dogs too. They are active cats that like to play and climb.

Body: The well-muscled body is medium sized and firmly built. It has a subtle impression, the hull is rectangular. Legs are average long and have large round paws. The tail is thick with a rounded toe. The head is medium sized, round and full of faces. The nose is bent with a pronounced stop, medium-sized ears are quite far apart, just like the eyes, and should have rounded toes.

Coat: The double coat is pleasantly soft, soft and supple. In adult age the cats of this breed, the coat on the tail and around the neck is wavier than the rest of the body. The structure and amount of waves on the back may change due to climate or hormone fluctuations. Wavy are also tactile hairs. Very free, flexible waves unrelated together are very required. It may take up to two years for the hair to develop completely. Kittens are already born with a wavy hair, but it is partly lost for six months and reappears in eight to ten months.

Care: A short coat of Selkirk Rex requires relatively little care, excessive brushing of hair rather it bothers. It is moulting just like cats with normal hair. It occurs in the spring and early summer when coat is given more attention. After bathing, the cat should not be thoroughly combed or brushed to prevent the waving of the hair. The sharp ends of the claws should be cut regularly, the ears cleaned if needed.

Colourful variety: Selkirk Rex may occur in all coat colours and any patterns. The structure of the coat more than its colouring is evaluated at Cat Shows. All eye colours are also allowed.