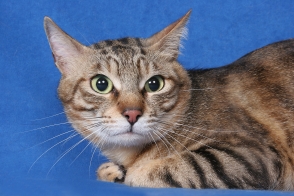 History: This breed came from the Sokoke forest in Kenya. A forest of about 400 km2 is located a few miles from the Indian Ocean, it is rather isolated and it has unique plant and animal species. Sokoke cats lived for decades there before they were discovered. They live predominantly on trees, and according to sources, they fed mainly insects. The tribes living there called them "khadzonzo".

In 1983, the breed was recognized as an "experimental breed of cats" under the name African Shorthair Cat. Officially, the Sokoke breed was named in 1992. In order to prevent family breeding, today different breeders import new individuals from Kenya.

Temperament: Although Sokoke has been taking care of themselves for generations, they are extremely well used to living like house cats, even though they keep their independence. They are intelligent, playful and active cats these cats can swim well and some of them like fishing. Sokoke are companion animals that love both a company of people and other cats or dogs. Although they will learn to live in the house, they will be happier to give them space.

Body: This is a medium sized cat with a long, slim, muscular body and a well-developed chest. Long slim legs have oval paws. The hind legs are longer than the front. The medium-length tail narrows at the end. The head is wedge-shaped and small in proportion to the body. The chin is massive and the nose almost straight. Medium-sized ears have a rounded toe and stand high on their heads. The eyes are oval to almond shaped, they are wide apart and have expressive expression.

Coat: Very short Sokoke´s coat is elastic and shining. The body is tight, because the undercoat is limited or completely absent.

Care: Sokoke ´s coat can be brushed once a week with a soft brush, combed with a cloth and with a wet suede cloth. The coat will be shine. Cut sharp claws and clean the ears if necessary.

Colour variants: Sokoke occurs only in blotched tabby - marbled pattern. It is always black on a grey or the golden-brown ground. An advantage it is the aguti strips in black chicks. Sokoke´s eyes are from amber to light green.

Sokoke´s patterns are different from marble. The oval pattern on the sides of the body is replaced by longitudinally extending stripes.