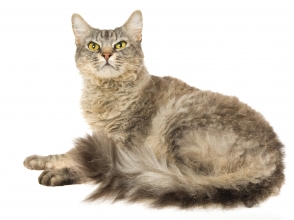 History: La Perm is a breed type Rex, although it is not related to any other type of manifold Rex. In 1982 in the litter of a crossbred cat there were born bald kittens in the United States, their hair started to grow at age of 8 weeks. It was curly, thick and soft. Thanks to their existence in the following years there was bred a few curly kittens, which became the founder of the breed. Since curly hair gene is dominant, when crossed with other cats mostly kittens born with curly hair.

Temperament: Permian cats are friendly and affectionate, they love people companions and other animals. They are curious, agile and enterprising cats that love to play and welcome. Also there are known their hunting skills. Thanks to longer hind legs are also among good jumpers.

Body: Although Permian cat comes from a mongrel cats, its appearance is oriental. Medium-sized, slender and well-built body is sleek and athletic appearance. It perched on long legs with rounded paws. Long bushy tail tapering to a point. The neck is long, the head broad wedge with a projecting nose. Big expressive eyes are almond shaped. The ears are set wide apart.

Coat: Although the Permian cats are born covered with hair, and soon they completely lose their hair, their dense, silky and curly hair can grow them later. Thanks to the texture by touch they are not silky, but rather it resembles mohair. The coat is light, airy, soft and flexible. The undercoat is thick. Depending on the season, coat changes, but it should be wavy or curly or with rings. The longest is around its neck. Longer curly hair is also located inside the ears. On the back can create a natural parting.

Care: Coat Permian cats does not require much care because it does not moult. But occasional brushing is fine. It is necessary to cut the sharp end of the nails and clean ears if necessary.

All colours and markings are allowed, including badges, sepia and mink.