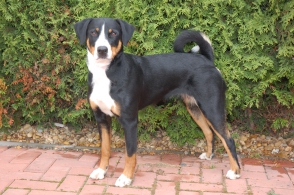 It is a sociable dog, lively, vivacious, cheerful and obedient, confident and fearless, although suspicious of strangers, incorruptible guard. Due to its origin and history, it was literally working dog, which often had to decide itself because it could not wait for the man´s command due to it is very independent, and its education is not easy. Itis not suitable for beginners who have no previous experience with dogs. You should pay more attention to it.

Appenzeller Cattle Dog does not belong permanently to the kennel or let it alone in shed, fixed on the chain - it would be the easiest way how it can become an aggressive dog. On the contrary, it requires the closest contact with the owner and family members - it is good, if it can be all time together with people. It is the bond strength, surfaces create the relationship between it and the owner, and it must be based on mutual trust and respect.

It is very necessary (perhaps even more necessary than in other Swiss Cattle dogs) is at the youngest age of the dog, great socialization. Not socialized dog would not be totally easy going in relation to other dogs, and this we must avoid. Training must be nice, but totally strict and its success does not depend on the dog, but only on the owner.

Well behaved Apenzell Cattle Dog is kind, friendly and utterly reliable companion of man. It is very agile. It loves and also needs the opportunity to run some physical and mental activity - e.g. a  job like  training rescue dog, obedience, agility, frisbee, flyball etc., in which it satisfies its desire for movement and apply the agility, speed and intelligence. If there is not enough time for such training there are a must at least regularly, adequately long and extensive walks.

This is a pretty tricolour coloured, medium-sized dog with an almost square body frame, proportional and harmonious physique, muscular, stocky rather than too light, moving and agile, with smart expression.

Height at wither, male 52 to 56 cm and female 50 to 54 cm (with a tolerance of + / -2 cm for both sex). Height at withers related to the length of the body as 9: 10; head corresponds to the size of the total size of the body and is slightly wedge-shaped. Skull above should be fairly flat, the widest between the ears, toward the muzzle tapers it is getting narrower.

The nasal dorsum should be straight, the nose must be black for the black subjects, by Havana brown type (colour Havana cigar) brown, dark as possible. Lips should be dry and must fit to the jaw and teeth. For dogs with a basic black coat colour to the edges of black, Havana brown with dark brown if possible. Oral corners are striking, jaw and teeth must be strong, which is especially true for the lower jaw. It has to be so massive that not muzzle when viewed from the side pointed. A full and regular scissor bite, pincer is not tolerated. Full dentition is requested, but a missing or a doubled first premolar (P1) and the absence of third molars (M3) is tolerated.

The neck is rather short, strong and dry. The body must be sturdy, compact. The back is moderately long, firm and straight; loins are short and very muscular; stern is relatively short and forms a smooth continuation of the topline of the body.

The tail should be set high, thick, moderately long and hairy. Hairs on its underside are somewhat longer. For movements to be tightly curled at the back, carried in the middle or on one side or the other, the position can be carried hanging various shapes.

The chest is broad and deep, so that it reaches to the elbows. Forechest be significant when viewed from the side exits point of sternum clearly in front of the leading edge of the shoulder joint. Breastbone extends quite far back; on the imaginary cross-section has an oval shape chest. The belly is only slightly tucked.

Dewclaws to be removed (except in countries where this act is prohibited by law on protection of animals); paws are short round, arched and tight toes, white borders and thickly padded.

The move is an event forelegs hearty (the "long reaching movement") and girdles are a source of significant forward drive pulse (ricochet). In the trot, the legs viewed from front and rear moving straight and parallel to the median longitudinal vertical part of the body.

The basic colour of the coat can be black or Havana brown with symmetrical as possible tan and white markings. Small tan markings above the eyes, cheeks, front chest (left and right, about the level of the shoulder joint) and on legs, with the tan colour is always the basic black, respectively. Havana brown and white spots form on the head blaze, a white blaze extending without interruption from the top through the nose saddle   to nose; may be wholly or partially cover muzzle.

From chin over throat to chest stretches uninterrupted white "front flashing". White are also all four paws and tail tip. A white patch on the neck or half "collar" is tolerated; continuous narrow white collar is permissible but it is not acceptable.

Faults include lack of sexual expression (not developed secondary sexual characteristics, so at first look you cannot determine whether  is a dog or bitch) long rectangular body format, disharmonic physique, smooth or too rough skeleton, muscular weakness, very heavy or very light head, above domed skull, too abrupt stop, muzzle excessively long, too short, narrow or pointed, other than a straight ricochet of the nose, too powerful (free) lips, lack of more than one first premolar (P1) and also not to parties protruding cheeks, its eyes round, protruding or light, earlobes too small, oversized, very high or very low, spine uttered (concave) or carp (arched as carp , Carp Back, species Rutilus Rutilus), the croup sloping or rebuilt (height level Hipbones greater than height at withers) distinctly tucked up abdomen, chest too flat or barrel-shaped, lacking in forechest, sternum too short, loosely curled tail (in the circle, if the tip still touches the root) insufficient angulation of fore and hind limbs, out at elbows, wrists soft "cow" hindquarters (cow hocks), paws elongated oval shape (called. rabbit) or finalized (with fingers spread) the movement is incorrect (e.g. with short and stiff action of the limbs), shuffling (with paws low over the base), with intersecting limbs during locomotion etc., undercoat growing through the outer coat, black dots on white stains, broken blaze, continuous broad white "collar" on the neck, discontinuous (interrupted) white front flashing, white markings on legs reaching distinctly above pastern ( "boots") absence of white on the tip of the tail and feet, the total size of insufficient or excessive ( not reaching or exceeding the specified range height at withers, including tolerance) behaviour indicative of a lack of confidence, lack of liveliness, slight sharpness.

To negative defects belong timidity, striking aggressiveness, overshot or undershot jaw, reverse bite, entropion, ectropion, eyes of blue coloured i.e. glass (whitish), tail sickle hooked (if you tip or affect its root) still suspended or kinked , other than hair of medium length, colour other than tricolour, other base coat colour than black or Havana brown.