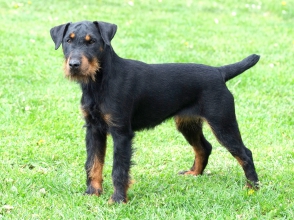 It is particularly versatile hunting, hardworking, persevering, vigorous, lively, extremely sharp dog at work absolutely reliable,   helpful and handy to owner. It should not be shy or aggressive to people. According to some opinions, however, it is so aggressive that at all it is not suitable as a companion dog and it has tendency to attack other dogs, it is not suitable for cities, too. Many owners-hunters disagree, although they admit that to other dogs is intolerant. They emphasize, however, that to the owner, children it behaves friendly. Undoubtedly, a lot it depends on the environment in which it lives, grows, the mode of education and training, but also it is the fact of what origin kennel it comes from and about its handling.

Some hunters considered the most suitable accommodation is when dog is permanently closed in the outdoor kennel, from which it is taken only for hunting or training since then it is said to be glad to get out of the pen, and it works with all the more enthusiasm and dedication. That it is not advisable to keep this breed in the pen permanently, because the best hunting achievements serve those individuals who have the opportunity to live in contact with the owner.

It is generally appreciated as flexible and obedient breed.  The question is who judges this breed. Even when it is training it manifests a boundless energy, eagerness and joy of work. It is preferable to the countryside than in cities, but if you walk with this breed without leash, it is quite danger for any cat or poultry, but even much larger animals. It is not suitable for beginners. If this breed is socialized from an early age it is very diligent and it wants to please its owner.

It's small, compact leggy Terrier with proportional body. Body should be slightly longer than height at withers. Male and female is 33-40 cm. Weight of body (by working condition) involves dogs about  9-10 kg  female from 7.5 to 8.5 kg.

The head is elongated, wedge-shaped, but not at the top of the muzzle pointed. The skull should be flat from above, the earlobes wide at eye level closer. Stop is gradual. The muzzle is slightly shorter than the skull, measured from occipital part after frontal slope (stop) and strong. The lower jaw should be powerful, prominent chin. The nose must be neither too narrow nor too small, and should not be affected by cleft. It has to be coloured black, in subjects with chocolate (liver) brown base coat colour brown. Cheeks are full.

Lips close fitting to the jaws and teeth and their edges are fully pigmented. The teeth are large, powerful jaws with a perfect, regular and complete scissor bite. Upper incisors protrude over down ones and touching them. Both must be planted vertically in the jaws. Teeth are complete, consisting of 42 teeth according to the dental formula, but lacking one or both molars 3 (M3) is not a malfunction (!).

Eyes should be dark, small and oval, properly stored so that they are protected from injury. Eyelids tight are fitting to the eyeballs. The view is determined. The earlobes are set high, tilted forward, "V", lightly about the inner edges of the cheeks and are downright tiny.

The neck should be strong, but not too long. It is carried slightly erect and at the transition into the shoulders stronger. Topline body should be straight, withers pronounced. The back is solid, straight and not too short. Loins are well muscled. Croup should be muscular, straight, elongated.

The tail must be properly installed and running out to roughly 1/3 (only in countries where the law on animal protection does not prohibit). It is rather carried slightly raised than steeply erected, may not be over back. In countries where docking is the law on protection of animals is prohibited, can be naturally long and should then be carried horizontally or slightly sabre.

The chest must be deep, its circumference should be about 10-12 cm higher than height at withers and depth is equal to approximately 55-60% of height at withers. The breastbone is long, the ribs are well sprung, not too broad and extend well past backward.

The forelegs must be seen from the front straight and parallel, viewed from the side to be part of their free (from the elbow to the foot), just below the body. Front feet are wider than the hind limbs paws. Pointing straight forward, they not turned in or out - both in attitude and in motion. The fingers are tightly clenched, with sufficiently thick, tough, durable and fully pigmented padded.

The hindquarters should be viewed from behind straight and parallel, strong bones, when viewed from the side well angulated knee and hock. Movement is spacious, smooth. Action forelegs must be long enough to pelvic are a source of powerful forward driving force (reflection). The legs move straight forward and locomotion are parallel to each other. They may never be splayed.

The hair is rough, contiguous, thick and tough, or short and rough. So far, there are numerous transitions between the two types of hair, sometimes at different muzzle broad hint of beard. Coat colour may be black, dark brown or black and gray streaked with tan (yellow-red), sharply defined clear markings above the eyes, on the muzzle, on front chest, legs and around the anus. Light and dark mask on the face are assessed equally. Small white marks on chest and front paws are permissible.