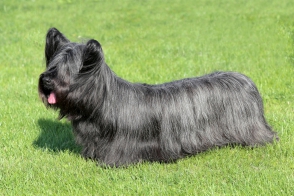 Its character is balanced, soulful, loyal and fiercely loyal owner that loves. Its behaviour is cultivated, absolutely fearless. If necessary, it shows considerable courage and focus. Nobody can play tricks with this breed. It does not seek even not initiate any disputes. Even when much larger dog would attack it, after it will fight hard and without embarrassment, while opponents will be surprised with unexpected swiftness and vigour and biting power.

It is sweet, cheerful and playful  dog. It is grateful when man pays attention to it, but it never asks for anything. It is too proud to say that it demands. It is not suitable for young children who do not understand what they can afford, even not for the owner who are passive, indecisive, lacking the natural authority for those owners it is not suitable companion. The owner needs a resolute but prudent, calm and consistent, endowed with natural authority and ability to apply it quite peacefully for various situations. Owner has to be consistent.

It is not suitable for anyone, especially not suitable for beginners. It is a typical "one-man dog," which means that the two-man as well as from larger families can usually choose one person it respects. To the others it is well tolerated, it follows   and respects them, however not too much as leader it chose by itself.
To strangers it is extremely distrustful. It does not know what fear is. It can also be sharp, e.g. someone unknown wants to be very familiar, but it is never spiteful or malicious.

Nobody strange, unknown should not try to make friendship with this breed because the long hair covering its face and there is not possible to watch its facial expressions and recognize the state of mind. Its bad mood can be slightly shown by growling. It moves remarkably easily and it can be surprisingly nimble. It is very self-confident and acts in a dignified manner.

It is at first look an unusually long, sleek, low, long-haired, heavily furred dog with unusual appearance, strong body and with an elongated body frame. The body length is measured from the withers to the root of the tail is roughly equal to twice of height at withers. It is ideally 25 to 26 cm. Body length from tip of nose to tip of tail should be 103 cm (!). Females are smaller, corresponding proportions.

The head is large and long duration must not be at the expense of power. Moderately broad skull is slightly tapered to the front and moves into a strong muzzle. The frontal slope (stop) is gradual. Nose must be black.

Jaws strong and symmetrical, with complete and regular scissor bite. Upper teeth are closely overlapping down ones, both of which are set square in the jaws.

Eyes should be brown, dark preferred. They are reasonably large, far apart imposed, significant. The leathers may be either erect or hanging. The first is clearly more attractive, the latter is very rare. Erect to be gracefully feathered, not too large, with vertical outer and inner edges slightly oblique to the direction from the peaks of the bases to each slant. Suspended lobe are more flat and the front edge closely adjacent to the head.

The neck is long, the neck slightly arched. Body has to be long and low, with hips-looking straight down through flowing long hair surface. The back is horizontal, short loin. Tail may be carried or hung at the upper line of the body. The second is much more attractive, visually dog much longer. If suspended, faces its first half down and the other is curved backward. If carried drawn straight backwards, not rising above the upper line of the body and should not curl. It has to be pretty hairy.

Chest is deep, long, on the imaginary cross-section oval. The forelegs are short and muscular, blades wide, adjacent to the chest. The hindquarters must be short, strong, muscular, solid bone and well bent when viewed from the rear straight, without dewclaws. Front feet are larger than the hind paws and must not be turned in or out. The pads must be full, strong nails. The motion seeks action limbs straight forward. Seen from the front, forelegs form a direct continuation called line the front of the queue. Feet are spaced the same distance apart as elbows.

Locomotion must be free of forelegs perfectly straight. Pelvic are the source of substantial forward driving forces (powerful reflection) and their actions directed straight ahead. Action forelegs should be properly elongated, not too high. Overall, the movement should be free, lively and light, as smooth as possible.

The body coat consists of an undercoat, which is short and close, soft and woolly, and top coat. It has to be reasonably long, hard, straight and without curls. Although the coat must be abundant, the dog must never impede movement. On its head is shorter and softer falls like a veil over its forehead and eyes, the dog must not obstruct the view. It coincides with the hair on the sides of the head and bypasses the ears so that it remains evident in their shape.

Coat colour may be black, dark or light grey, fawn or cream, if it is necessary with black ends of hair. All colours are tolerated differently deep hues and lighter undercoat, if the ears and muzzle are coloured black. A small white patch on the front of the chest is permissible.