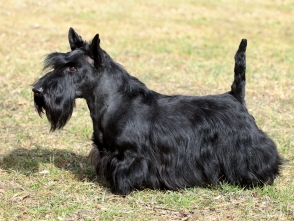 It deserves public interest not only by an unmistakable appearance due to its typical grooming, but also its character - it always behaves warily and it is a reflection of considerable strength and activity "in miniature". It's a small dog's body and a big soul, always ready to go anywhere and do anything. Despite short legs, it is agile and active. It gets dignity it is absolutely fearless, confident and independent, to its own people it is friendly to strangers restrained, intelligent, courageous, but it is never aggressive. It is very self confident dog, you cannot play any tricks with it, but it gets well with dogs. It has a tendency to chase small carnivores, rodents, etc. which are the remains of hunting instinct.

It depends on the systematic early socialization and upbringing - socialization must be broad, Education utterly consistent, sweet, but tough. Owner needs to be decisive, with natural authority and acting always consistently. By its cleverness it soon understands what is and is not allowed. If it exceeds its limits, more than enough adequate (accusingly, not threatening) intonation. No physical punishment. The important thing is to build coexistence with it on mutual trust and respect.
Relatively ordinary "offense" is irresistible desire to chase and catch moving objects - from cars, cyclists to strollers and scooters. And this tendency may be muted by training. It can by shown later only by barking. It is necessary, where it can meet these opportunities, owner must have a leash. Necessary care and grooming it makes it difficult to care and breed.

It's solidly built, low, sturdy dog, alert and agile, which may not show signs of obesity. Its character is an image of great power and activity in small "design". Despite short limbs must be quick and nimble. Height at withers is from 25 to 28 cm, weight of body is from 8.5 to 10.5 kg.

The head should be in proportion to the overall size of long, but must not violate the overall balance of the appearance of the neck of moderate length must have the opportunity to excel. The muzzle is as long as its skull. It has to be above almost flat and must be so long as to be reasonably broad and narrow while overall. The frontal slope (stop) is only slightly sloping, but distinct.

Muzzle must be strong and full length adequately deep. Its length is the same as that of the skull. Nose must be black and large. When viewed from the side gives way to the front line from the tip to the chin (slanted).

The teeth are large, required to complete regular scissor bite, upper teeth six incisors just cover six down teeth, both of which are embedded in the jaws. Cheeks should be flat, zygomatic arches not protruded sideways.

The eyes should be almond shaped, dark brown in colour, saved quite far apart and far below the eyebrows. Their expression is bright and clever. Earlobes must be neat, delicate, top pointed, erect, set high but not too close together. Extremely undesirable pinna is large, broad at the base and set low.

The chest is quite broad and reaches deep between the forelegs. It consist moderately well sprung ribs, which are towards the sternum flattened and give him the proper depth. Last extends far back so that the distance between them and the rear legs are short, the hull must be called and tightly tied.

The forelegs are straight, strong bones, shoulder blades long, slanting, so that their tops upwards and backwards. The elbows must not be turned in or out. Pasterns should be straight. The hindquarters are in proportion to the overall size of the dog remarkably robust. The thighs should be wide, powerfully muscled, moderately angulated knee. Hocks should be strong and not be either convergent or divergent.

The hocks are short and strong, viewed from behind parallel to each other. Feet should be adequately large, fixed-padded and well arched well-knit toes. At the forelegs they are slightly larger than the hind.

The movement is smooth, free, harmonious overall. Events and hind legs must be hearty and pointing straight ahead. Pelvic are copious source of forward momentum (reflection).

The hair is contiguous and consists of a short, dense and soft undercoat and a hard, dense, wiry outer coat. It creates the perfect protection against the weather. Colouring may be black, wheaten or brindle of any shade.