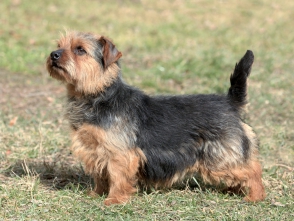 A lively, fearless, but not quarrel dog but unlike many other Terriers. Devoid of any sharpness of any hunting abilities, wildlife and its traces it is not interested in  at all; its owner is extremely loyal; it is the happiest  if it  can be in owner´s  immediate vicinity; sad contrast, when it  is locked in an outdoor kennel, where mentally it  suffers from a lack of contact with people.  It is  a dog with a neat appearance, its biggest advantage is grace and nature; it  is a cute, cheerful and friendly with  people, including children, and even strangers and other dogs and other domestic animals including pets. It is never aggressive, conflicts with other dogs in any case  it does not seek and  it tries  to avoid them; It is smart, fearless, but also extremely sensitive dog.

The education does not make any difficulties, it is necessary only kind consistency; as intelligent and obedient dog-friendly owner and family members it learns quickly and well, just all must "pull together" what owner forbids second must not allow , this breed  is smart enough that it starts soon  to abuse .It would  be considered disobedient; rough conduct on the part of the owner does not deserve it, and unhappy, especially when it is unjust; a reprimand for the actual offense just reprimand with proper intonation (not intensity) voice,  its size and coat fits into small urban dwellings; walks it is not too demanding, although it is still unable to complete even longer hikes; Its great advantage is that it does not tend to move away from the owner, because the wildlife or its tracks is not interested in , so it can be sloughed off on walks freely; relative to the desired sturdy construction of the body it is suitable to feed in adulthood 2 times a day; It requires grooming, which is in no way cut like the Scottish Terrier, but sensitive highlighting the desired contour lines, so it is quite difficult and cannot be entrusted to anyone; only someone who knows the breed and owner  is also endowed with a certain artistic feeling, talent , this person  can take on with success.

It is one of the smallest Terriers, small, low dog with a compact body, short back, strong constitution, matching substance and heavy bone; height at withers is about 25 cm by both sexes.

The head is broad, slightly rounded and slightly above the domed skull, which is the widest among the earlobes; frontal slope (stop) should be clearly declining.

Muzzle is strong and has a wedge shape; its length, the distance from tip of nose to stop (connect inner eye corners) should be about 1/3 less than the length of the skull, distance from occipital part to stop. Lips close fitting to the jaw and teeth; strong jaws as well as the teeth must  be in proportion to the total size of the dog rather massive; desirable to perfect a complete scissor bite, which means that 6 incisors upper teeth tightly overlaps down ones  6, both of which are to be embedded vertically in the jaws. The eyes are oval-shaped, dark brown to almost black; their expression is alert, keen and intelligent. Ears should be of moderate size, the shape of the letter "V", with slightly rounded tips, tilted forward so that the inner edges fit tightly to the cheek.

The neck is strong, medium length; body should be compact, upper body lines straight, short spine. The tail is set at the upper line of the body, carried upward; it may be docked (if the act is not prohibited by law on protection of animals) or docked; docked so that the medium length, undocked not be too long and the overall balance of the individual; thick at the root towards the tip narrowing should be as straight as possible; it should be carried gaily, but not so that was already flipped from the root forward over the back.

The forelegs are dryly muscled, short, strong and straight. Feet are round shape with a flexible padded; hindquarters must be well muscled, knees bent accordingly; hocks low to the foundation or the divergent or convergent; the condition of a significant rebound for locomotion. Movement should be vigorous, smooth and hearty; forward action forelegs from shoulder; properly angulated hindquarters are a source of considerable forward driving force; while walking watching forelegs, moving in the same direction; their action is based on the hip, knee and hock joints flexible; topline body stays in motion equals.

The coat is hard, wiry, straight, lying adjacent to the skin, closed, neck and shoulders longer and thicker (called collar) on the head and ear lobe shorter and softer with the exception of very whiskers and eyebrows. Excessive finish coat is undesirable; coat colour can be any shade of red, including called pinkie, i.e. pink; such individuals are born almost white, with no traces of pigment in the nose, antipersonnel pads of paws, claws etc., but from birth throughout life darkens getting more pigmented so already in 8-10 weeks of dog´s age when proper nutrition have fully pigmented nose, eye rims, lips, etc., and the hair has a reddish at the time ("pink") colour. In pedigree is its colour called "red pinkie ", which is important for breeding, it is not advisable to associate with individuals of colour for the possibility of loss of pigment by puppies (nose, the edges of eyelids and lips, etc.). Common wheat  colour is shade, black and tan or "grizzly" (reddish, red with shading), which is a mixture of red and black-gray of hair; white markings or spots occurring most often on the front chest undesirable but permissible.