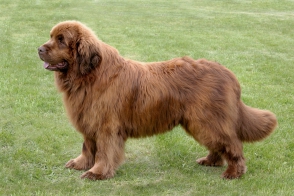 It is kind hearted, gentle, thoughtful, friendly dog that it does not seek and it does not like quarrelling, but that certainly it does not mean that it is fearful. But because it is well aware of its own strength and physical superiority, it begins with detachment. It is confident, kind, good-natured and behaves with dignity. Owner and members of its family, including children, it is completely loyal and faithful to other dogs and other domestic animals, including small pets, are welcoming. Dominantly it acts only against dogs that it allows more than is correct, otherwise it is peaceful.

With children it has infinite patience, so it is called nanny dog. For small and hyperactive children, it is necessary to keep your eye on children if they do not hurt it. To totally unknown person it is friendly and helpful. Its behaviour confirms that its epithet "noble giant" rightly belongs. Despite all it is kindness and gentleness but it is always ready to defend hard-owner and his family.

It reacts sensitively to the intonation of voice (must be clear and clearly understandable) and its education is not respecting the fundamental principles of consistency, it is not particularly problematic. It tends to be accepted, and therefore no penalties are necessary. If necessary, sufficient verbal reprimand which must be stated more clearly than reproachful reproving or even menacing intonation. It understands fast and easy to learn, but it is usually tired after long training. Definitely it must learn at an early age that it cannot pull on a leash its owner. Dog with body, withers a fairly low centre of gravity to the ground, and hence stable even when in motion, in adulthood leash difficult to handle even a strong man.

Education must be peaceful, gradual and well trained. It cannot be rushed. Multiple repetitions of one exercise cause a job it can lose interest, it is therefore better to spread training in several phases, or to diversify its practicing members already perfectly mastered. Important is also positive stimulation, joyful praise and tasty treat, especially one that is so fond of, but at no other time than in the education and training it can get.

The body is a compact. Female may be slightly longer and is less massive than male. Height at withers for adult dogs, approximately 71 cm in adult females is around 66 cm. Weight at body involves the male about68 kg, and for females about 54 kg. The larger size is desirable, but not at the expense of balance and power of body, overall health and correct movement. The head should be powerful, female same as by males, only slightly less massive.

The skull should be broad, slightly arched above, with a strong occiput. The frontal slope (stop) should be distinct, but must never be precipitous. Muzzle is required decidedly angular, deep (when viewed in profile, high) and relatively short, without wrinkles, covered with short, fine hair. The nose is large, fully pigmented, with well-open nostrils, in black and white-black black, brown with brown. Lips are soft, mouth corners distinct, but not too strong, free and even open. The bite can be a scissor or pincer.

The eyes are fairly small, moderately deep and far apart imposed, their colour is dark brown in black and white and black dogs and bitches in brown is permitted a lighter shade of the colour of the iris. Conjunctiva must not be apparent.

The earlobes are suspended, fairly small and triangular in shape, with rounded tops, mounted on the sides of the head, slightly behind, immediately adjacent to it and if stretched ahead without violence, reaching an adult to the inner corner of the eye on the same side of the head.

The neck should be strong, muscular, firmly attached to the shoulders and long enough to permit dignified head carriage. On the neck should not be excessively large lobe. The body is generally bulky, when viewed from the side of a deep and powerful. Topline body should be straight and firm from withers to croup, the saddle is broad shoulders are strong and well-muscled. Croup should be broad and steep.

The tail acts as a rudder when swimming, and must therefore be strong at the root and wide. The attitude is freely suspended, sometimes at the end curved upwards, reaching to the hocks or a little below them. For movement or excitement can be carried horizontally (at the upper line of the body) at the end of a slightly curved upwards. It should never be curled over the back, but not downloaded the hindquarters.

The chest should be broad and deep, spacious with properly sprung ribs. The bottom line of the body is almost equal to the abdomen should not be significantly cut up. The forelegs are straight and parallel both while walking and during a slow trot. Shoulders should be well muscled, adequately blades oblique, so that their tops upwards and backwards, elbows close to chest.

Pasterns when viewed from the side slightly angled. Feet should be round, firm, compact and large - size should correspond to the total size of the dog or bitch. The fingers are thick and solid, combined inter-digital skin duplications (usually incorrectly called "webbed").

The hindquarters serve as a source of abundant forward driving force necessary for pulling loads, swimming and moving on land. The pelvis has to be strong, broad and long thighs should be wide enough and powerful musculature.

Dewclaws, if any, should be removed, which is not possible in countries where the act of law for the protection of animals is prohibited. The movement of the forelegs show a large event and pelvis are the source of substantial forward driving force (reflection). Light rocking back behind the movement is natural, the speed increases, the dog tends (seen when viewed from the front and back) paws touching the base closer to the median longitudinal vertical plane of the body, while the upper body remains horizontal line.

The coat is waterproof and consists of a top coat and undercoat. The outer coat should be moderately long and straight with no curl, but it can be slightly wavy. The undercoat must be soft and dense, denser in winter than in summer, but in the chest and rump is largely dense always. On head, muzzle and earlobes hair is short and thick, on the back of front and hind legs longer tail is completely covered with long, dense hair, but does not form on the underside so. Flag.

Grooming is not recommended. Colouring can be black, white or brown-black. Black is the most common and should preferably be uniform, but it is allowed Titian light shade, which is a result of fading hair (especially wet) due to direct sunlight or nutritional deficiencies (if it contains food for a longer period of time a lot of beta-carotene or carrots). Whitespace from the front of the chest, paws and tip of tail are permissible, white-black coloration, the carriers must be distinguished from the Landseer. It is a traditional preference when it gives a black-coloured head, possibly with white blaze on his forehead, stretching to the muzzle, uniformly black saddle, rear and top of the tail.

Other parts of the body to be white, but allowed them to present minimal black dotted. Brown colour shade can have chocolate to bronze (with a shade of Titian) whitespace from the front of the chest, paws and tip of tail are permissible. White and black and brown individuals at dog shows held under the patronage of the FCI considered together with black.