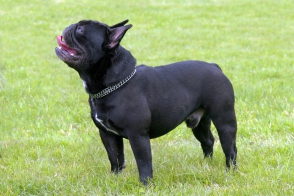 Character of French Bulldog is very friendly, sociable, cheerful, playful and sporty dog, which is particularly affectionate to its owners and children.

Because it is a very social, it should never be kept in outdoor kennels. Urgently it needs close contact with people and owner should keep in mind that short hair it does not adequately protect it from the cold. French Bulldog must always show proper vibrancy and brightness. It's clever, sometimes even cunning, docile and intelligent dog.

The education does not make any more problems if the owner is consistent. It is compatible well even with strangers, the dog that does not know, and with domestic pets. Particular attention should be paid to it in summer at high temperatures, particularly at high relative humidity, which like other breeds with chondrodystrofic shortened bones of the skull base and any complicated course. It must have an opportunity to lie mainly in a shade, relax on well-ventilated place.

This is a typical short-Mastiff Dog small size, but although small, it is a powerful, compact, stocky and very muscular, strong and firm ground. For the dog, in good nutritional status the weight of body must not be less than 8 kg and more than 14 kg. Height at withers must be proportionate.

The head should be relatively robust, broad and square. The skin on her forming almost symmetrical folds and wrinkles. Muzzle is significantly shortened. The skull has to be even greater, what about is shorter. The skull must be above broad, almost flat, strongly arched brow. Protruding brow ridges are separated by a furrow, which is particularly pronounced between the eyes, but cannot continue on the forehead.

Eyes should be stored far enough away from the nose and especially from the earlobes. They are dark in colour, relatively large, nicely rounded, keen expression. Only very slightly raised and looking directly ahead for them not to be seen or piece of sclera. The edges of the eyelids must be black.

The earlobes are medium sized, broad at the base and rounded tops, high on the head, but not close together at the base. Upright and open forward. The skin on them must be thin and soft by the touch.

Topline body when viewed from the side rises up to the shoulders and then quickly dropping to the tail. The cause of this is very typical during the short loin.

The tail should be short, low set, thick at the root fitting to the rear sides of thighs and knotted or kinked naturally. Towards the end of the tapers. Even the movement must always be below the upper line of the body. Relatively long, but not reaching to the hocks and kinked and tapering is admissible, it is not acceptable.

The chest should be cylindrical and very deep. The hindquarters are strong and well-muscled, slightly longer than the chest, so height hipbones level is higher than the withers. When viewed from the side and rear are straight and vertical to ground.