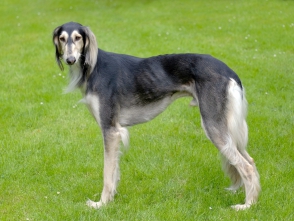 Its behaviour is extremely measured thoroughly noble, it looks like it does not   it is not interested in normal events, environment etc. Certainly it does not make and relationship with strangers it is carefully choosing which dogs and humans will communicate with. With people who are the friends, it gets well and it is willing to play with. This breed it decides itself.

To its own people is very friendly, it likes to participate in their lives, it can be gentle, considerate and sociable. It is the happiest if it can be all member of "the pack" together, restless and it is anxious when someone is missing. It has a warm relationship with "their" children. It is always ready to defend them.

It behaves independently. It is based aristocratic and close its soul by itself. Originally it was used as a hunting dog, especially when hunting solipeds and cloven-hoofed animals inhabiting the steppe, semi-desert and desert habitats. A strong hunting instinct it persists with it, even though it has been for generations a social dog. Animals other than dogs it tends to consider as a prey, which is chasing.

It needs an owner who can understand its character foundation and respected man by nature endowed with plenty of empathy. Its education is not entirely easy, the owner has to non-violently broken into its psyche, understand that its counterpart requires a certain seriousness it hates harsh treatment. The owner must ensure its early socialization and sensitive, in all kindness, but totally consistent training.

Like every Greyhound urgently needs plenty of exercise. After proper socialization and training it may participate in Greyhound racing. As fitness training is then suitable for e.g. runs along bikes, but simply and appropriately long sharper pace regular walks on a leash. They represent more exercise than a much longer move freely, which also is associated with the risk of chasing a deer. It runs freely if the Greyhound has with its speed, a lot of time waiting for the owner whilst relaxing. Sporty used by an individual requires in addition to fitness training and training on the track also it needs adequate nutrition. Definitely it cannot live in an outdoor kennel.

It is a slender, perfectly balanced, graceful and strong, but never rude dog, very fast, with a beautiful movement. Physique is very perfectly suited for fast running as other breed. Body size is short rectangular. The skeleton must be lightweight but strong, well developed muscles, dry. Height at withers ma le is 58-71 cm, female may be slightly less.

The head must be generally long and narrow, very noble. When viewed from above, it has a wedge shape gradually and evenly tapering towards the nose. In profile, the upper line of the skull in the imaginary extension of the line of the muzzle. Skull should be between earlobes moderately wide, flat, frontal slope (stop) gentle, inexpressive. Jaw must not be weak. The nose can be black or chocolate brown.

The eyes are large, oval, dark brown or hazel. They may never be protruding. The view is dignified, soft and affectionate. The earlobes are required relatively high, roughly in line of the outer eye corners set, hanging, appropriately long, closely fitting to the cheeks, but mobile and covered with long, soft and silky hair. In the short-haired character the long hair on the earlobes is missing.

The neck is long, flexible, powerfully muscled, but never rude, merges smoothly into the shoulders. Body can never be too heavy. The back should not be overly broad. The chest must be spacious, deep and long, but not too broad, formed reasonably sprung ribs. Abdomen should be tucked up strongly since the Persian Greyhound must be slender. The level of hipbones be possible to embrace its body with both hands so that the thumbs touching the tips of his spine and intermediaries under the belly.

The forelegs are sloping shoulder blade, whose peaks pointing backwards. They must be well-muscled but never coarse, as bulging shoulders undesirable. Shoulder bones must be almost as long as the blades. Forearms are long from elbow to wrist completely straight pasterns must be strong and flexible, when viewed from the side slightly askew. Feet should be moderately long, with elongated toes arched, or "cat" or unsealed, two middle fingers are longer than either extreme. Overall paws must be strong and flexible.

Demand is strong hind legs allowing the dog to run fast and jump. Knees should be slightly bent, hocks fairly low over the base. Feet are the same as the forequarters, between fingers of paws and hind legs must not miss the long hair, which effectively protects against possible injuries (in the short-haired character long fur between the toes missing).

The loin should be slightly arched, well muscled, croup is slightly sloping. Bumps hip bones should be quite far apart and easily identifiable. Low tail should be long, and if it is drawn down, a tip reaching at least the hock. It is usually carried in a delicate arc in adults at a maximum level of the upper body lines. At the longhaired character is on the underside of the long, silky coat forming a distinctive "nature of the short fringing at the tail feathering shortly.

Coat should be smooth, soft, silky texture. At the longhaired character is the longest hair on the ears, the tail and rear sides of the front and hind legs, which form called fringe. Longer hair on throat, common in young individuals is permissible for adults. Coat short haired character is harder than the longhaired coat, not so soft and silky. All colours and colour combinations are permitted with the exception of the brindle colour, this is undesirable.