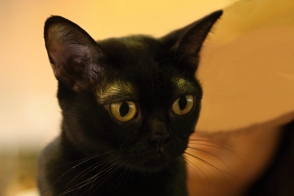 History: It is a breed that does not occur very often and it is relatively rare in Europe. A Bombay Cat was developed by crossing a Burmese Cat with a Black American Shorthair Cat. The result was a Burmese Cat with a beautiful varnish-black hair. In addition to crossing with each other, Bombay Cats are still crossed with the Burmese cats. While CFA and TICA have already recognized this breed, the Bombay Cat has still non-recognition by FIFe.

Nature: Due to its origin, the character of a Bombay Cat can be compared to a Burmese Cat. They are mild individuals that are getting well with other cats and dogs. They can be a good friend for the baby. Bombay Cats are calm, balanced and social. They do not like to be alone. In addition to the company they require a great deal of attention.

Body: Not only the nature, but also the Bombay Cat looks similar to those of the Burmese. Due to the influence of American Shorthair Cat, it is a bit more robust and has a rounded head. The mid-sized body is muscular. The construction of the body must not be too subtle nor too subdued. The legs are medium-long, just like the tail. It must not show any bumps. The rounded head has a nose with a pronounced bend at the point where it goes to the top of the skull. Round eyes are set wide apart. Ears are relatively small and stand slightly forward. They are rounded and broad on the base.

Coat: The coat is very short, smoothly attached to the body and it has little undercoat. It should have a deep satin gloss and it should be as black as possible.

Care: To keep a high gloss and a deep varnish-black colour of the hair, it is enough to fondle it regularly and occasionally gently polish with a suede cloth. The sharp ends of the claws should be cut regularly and clean ears.

Colour varieties: A Bombay Cat is in a black variety. It is characterized by dark black colour with a high gloss of coat. There should be no white hairs or other deviations in the coat, and the nose and paw pads are black. Kittens may have a rusty tan hair that disappears over time.

Other kittens may appear in the litter of Bombay Cats. Those ones are in the colours of Burmese Cats are mostly not used for further breeding and kittens in pure colours (chocolate, blue or lilac) are not recognized. The most demanding eye colour is copper, but may also be golden-yellow.