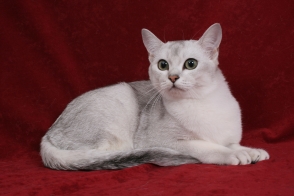 History: Burmilla was recognized by organization FIFe until 1995. The breed was created artificially in 1981 in London. At that time, the Persian Chinchillas and the Burmese Cat were crossed and the subsequent breeding lasted for 15 years. Originally the breed was named by a combination of parents´ names - Burmese Chinchillas. Later, the name was shortened to Burmilla.

Temperament: Burmilla´s temperament is a mixture of its ancestors. It is a very intelligent, active, inquisitive and playful cat. But it is very patient and adaptable. With other cats, dogs it is getting well.

Body: This medium cat has elegant and exotic looks. The body is medium sized, it has a rounded chest and straight back. Slimmer limbs have well-developed bones and hind feet are slightly taller than the front. The medium to long tail is moderately thick and slightly tapered to the rounded toe. The head with a rounded skull is in the horizontal line of eyebrows and in the jaws wide and narrows into a short wedge. The nose in the profile shows a slight deflection. The tip of the nose should be one line with the chin. Medium to large ears are wide in the base and have slightly rounded toes. On the head, they are set midway far from each other with a slight incline forward. Big eyes are set far apart and slightly oblique. The top line is slightly rounded and runs at a blunt angle to the nose. The bottom line is rounded much more strongly.

Coat:  Burmilla´s coat is short, dense with a silky texture. It sticks smoothly to the body, but it is slightly lifted up by a dense undercoat.

Care: Burmilla´s does not require any special care. A weekly brushing is enough. External ear canals should be cleaned if necessary, and the sharp ends of the claws should be cut.

Colour variants: Burmilla is found in black, blue, chocolate, lilac, cinnamon, red, creamy and silvery-shaded and shaded. Furthermore, in all tortoise shaded and shades varieties. The distinctive and shining eye´s colour it is dark framed. All shades of green are allowed. In kittens and young individuals a yellow tinge is possible.