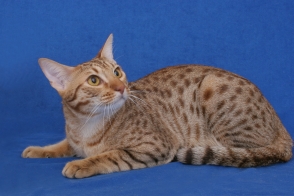 History: Ocicat is a very rare breed that has not yet attracted much attention outside of the United States. Its name is derived from steel - South American wild cat known for its striking dotted pattern. This breed  was originated around 1964, from a more or less random crossing of Siamese Cat with chocolate badges and cats from Siamese and Abyssinian parents. One kitten from the litter had a peculiarly dotted pattern, which the founder of the Virginia Daly breed managed to stabilize. For the introduction of silvery factor into the breed, several American shorthaired cats were later added to the breeding program. In 1987, he was recognized by organizations in the United States.

Temperament: This is a friendly, open and active cat with a spontaneous character. They are playful, intelligent and they have a great need for society and attention. Therefore, you should not buy only one individual of this breed if you spend most of the day away from home. With other cats they are getting well and the relationship with dogs is also no problem.

Body: Considering the Ocicat, it is strikingly similar to the Egyptian Cat Mau. The most striking difference between them is the shape of the head. Ocicat is a fairly big and muscular cat, but it still works elegantly. Its body construction must not be either oriental or substructured. Long legs have medium oval paws. The tail is long in relation to the body, and it fits into the tip. The wedge head has a slightly quadratic shape of the muzzle. Large eyes of almond shape are laid oriental and lie far enough apart. The outer side of the ears forms a smooth line with the face profile. At the base, the ears are wide.

Coat: The fairly short Ocicat´s coat is shining and seamlessly sticks to the body. The touch is soft and has a silky texture.

Care: The Ocicat we can brush once a week. You can attract its shine by polishing with a wet cloth. Sharpen the tips of the claws if necessary we can cut, the ears clean when is necessary.

Colour variants: Ocicat is striking with its dotted pattern. Pattern on the head is the same as by other dotted cats. Round spines run along the spine from the blades to the tail. At the shoulders and at the back of the body, the dots are dense and go deeper into the limbs. On the sides of the body, the spots are large and in the shape of a fingerprint. It occurs in black, blue, chocolate, lilac, cinnamon and swollen spotted or silvery spotted. Stains must be as tightly delimited as possible and must not blend. Eyes are mostly green or amber, but all other colours except blue are allowed.